A Covid-19 Resilience Team Prepares for the Next Disaster

A team whose resumes were written when Hurricane Katrina whiplashed the mighty Mississippi into a fury has stepped forward to meet Covid-19 by implementing a resilience model that offers critical lessons for the future, and is urging the country as a whole to take this moment to prepare for the next disaster.

Team members in New Orleans, going door-to-door in vulnerable neighborhoods, book appointments and offer transportation to testing and vaccine sites. They also provide contact tracing as well as larger care coordination, including access to food packages and hygiene kits. The workers, most of whom were laid off in the Covid-19 shutdowns, help residents identify and apply for potential benefits and workers be aware of their rights.

At the same time, they are building more hardiness into the city’s workforce development and community support systems.

“The tale we’ve lived to tell after Katrina is that recoveries are neither equal nor inevitable, and that they take a very long time. But done right, they can spur equity and build racial and economic justice,” says Saket Soni, Executive Director of the non-profit Resilience Force and one of the first responders to Katrina a decade and a half ago.

The stakeholders in this effort are many, including city government, local health officials, the business community, philanthropists like the Foundation, and the workers themselves. Thus the best way to meet the moment, Soni says, is through broad public-private partnerships, like this one with The Rockefeller Foundation, that allow for both nimble reactions and scaling of solutions.

“With its special geographic, cultural, and historical significance, the challenges New Orleans is facing are both unique and all too commonplace,” says Marina Pravdic, the Foundation’s Manager, Communications, Policy and Advocacy. “As climate changes, pandemics and other sudden shocks to the system are unfortunately here to stay, other cities should follow the example of New Orleans to prepare for and prevent future disasters.”

Resilience Force, which had a staff of eight pre-Covid, has hired an additional four team supervisors and 12 community healthcare workers—12 Black and four Latinx. As of March 15, the canvassers had interacted with at least 10,000 households. And when others begin talking about winding down from Covid-19, this non-profit will instead be heightening preparedness and analyzing lessons learned.

“Developed in New Orleans, an epicenter for Covid and climate change, the Resilience Corps charts a path for how communities can invest in year-round resilience work and create good jobs for communities on the frontlines of disasters who are too often left out of relief and left behind in recovery,” says Craig Fugate, the Federal Emergency Management Agency (FEMA) administrator from 2009-2017.

Future Resilient Workers as Integrated into Cities as Firefighters

“The pandemic, as difficult and long as it has been, is a dress rehearsal for a much more long-term crisis that we are all going to face year in and year out, which is climate change,” says Soni, a recognized national expert on post-disaster economies as well as immigrant rights and the future of work.

“All the things we learned during this pandemic—to recognize and respect the work of essential workers, live with volatility, invest in jobs, create a safety net that goes well beyond what we thought of as government’s responsibility—all of those things that the majority of Americans suddenly agreed on during the pandemic will be deeply relevant for the next decade as at least half the county faces some catastrophe each year,” he said.

“We were the first to see this, right after Hurricane Katrina. So now New Orleans is on the cutting edge of building what many cities will need: a resilient workforce that will be as integrated into cities of the future as firefighters are.”

New Orleans’ economy is heavily fueled by tourism and service sector jobs, so the city suffers disproportionately when travel stops or stalls. Covid-19 cost the local economy some 25,000 jobs in the accommodation and food services sectors, with a 55.8 percent decrease in the city’s arts, entertainment and recreation consumer spending, and a 33 percent drop in restaurant and hotel spending.

That impacts many New Orleans households, so to make sure they are reaching everyone who needs them, “we’re using a model similar to a political campaign,” says LaTanja Silvester, Louisiana Director for Resilience Force and herself a New Orleans native and veteran activist with significant experience in political campaigns. “We’re knocking on doors, trying to reach those hardest-hit by the pandemic.”

Understanding the Importance of Meaningful Work

Soni and Silvester, who have known one another for about two decades, can both point to chance encounters post-Katrina that inform their shared priorities on workforce development.

Soni recalls meeting a former shipyard welder who lost his job after the hurricane washed his car away and he couldn’t get to work. His home was still without electricity two and a half years after Katrina. Through a temp agency, he had taken a job demolishing public housing.

“It was a Monday night when I visited him. He cooked me red beans and rice and we talked about the future,” Soni recalls. “Long after the cameras had gone, he was still struggling. The disaster of Katrina had so narrowed his field of choices. And he was looking to us to provide certainty.” 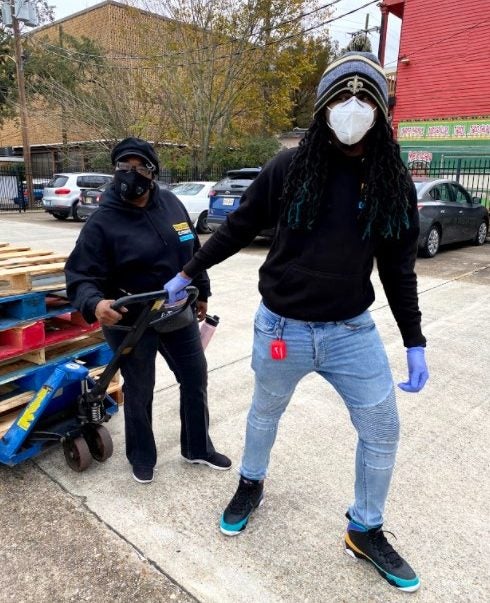 The woman Silvester can’t forget is a Black schoolteacher who was among thousands fired post-Katrina when officials said they didn’t know when schools would reopen or how many jobs would remain.

“She had spent 20 years as a teacher in the New Orleans school system. She loved teaching, so for her, it wasn’t only about a job, but the devastation of losing that particular job. She was lost. And I began to realize that there were people behind this disaster who were going to hurt for decades to come.”

When the shutdowns began in March of last year, “it was so clear this was the moment where we had to jump in and write a new playbook for New Orleans to recover, and at the center had to be good jobs,” Silvester says. “The question we asked was: How could the workers who made New Orleans run right up until the day the pandemic began be supported to change lanes, and get paid to drive New Orleans’ recovery?”

To carry out that assignment, Resilience Force is hiring and training workers like Pam Bourgeois, 59, a New Orleans native, mother of two and grandmother of six who lost her home when Katrina hit with its sustained wind speeds of 175 mph and 30-foot storm surges, flooding some 80 percent of her hometown. 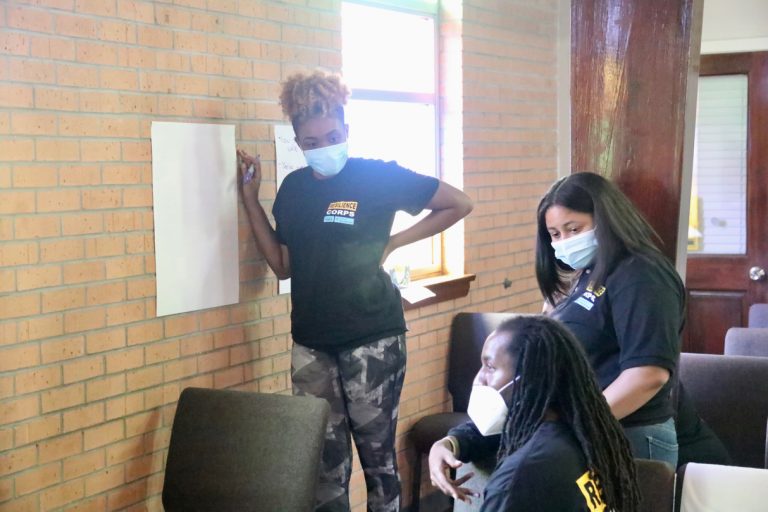 “Devastation, chaos, hardship, sadness, disarray—so many words you can use to describe that hurricane. It tore us apart,” recalls Miss Pam, as she is known in her community. “But it was also a turning point in my life. Katrina helped me grow. It taught me a lesson in humility and patience. I learned what my strengths are and how to reinvent myself. My priorities changed.”

Miss Pam has worked in a variety of jobs, including as a school cafeteria worker, a payday loan company service representative, a cashier, and—right before the Covid shutdowns—a reservations agent. “Even before Covid-19, Miss Pam has always been someone her neighbors turned to when they needed help or advice,” says Silvester.

Her job as a Resilience Force supervisor “is more rewarding than anything I’ve ever done,” Miss Pam says. “I refer to us as walking warriors. We are constantly building trust with our neighbors, and getting more training to prepare ourselves for the next tragedy. I find that to be hopeful work.”

Dazmine Allen, 29, is one of those workers. A New Orleans native, he was managing a bar in the French Quarter when the Covid-19 shutdowns began and he had no income. Though Allen was young when Katrina hit, he still recalls it as traumatizing. “We lost everything,” he says. “I have no baby pictures anymore.”

“I think this job may be the silver lining for me this time,” he says. In his role as a Resilience Force team supervisor, “we go into communities where Black and Brown people live, partner with them, canvas the area, and make a difference. I think this should be a goal across the country.” 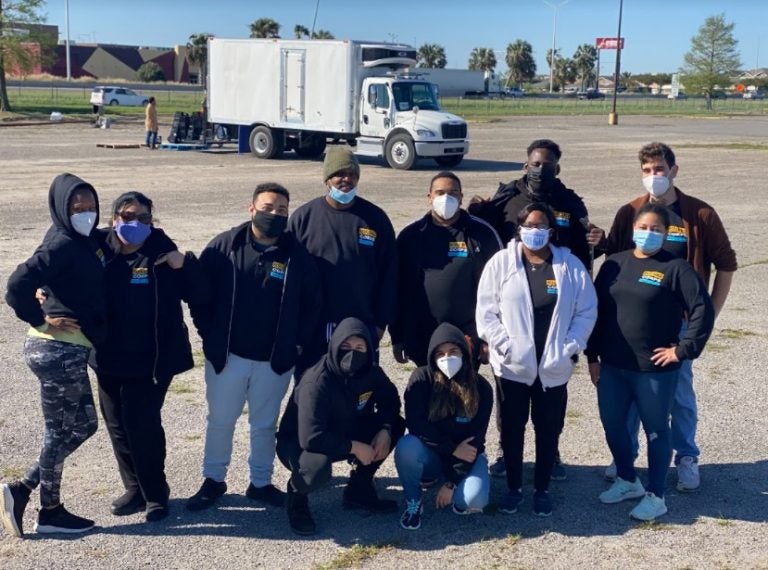 Rosella and her team after unloading two truckloads of food and distributing it to the local community.

Daniel Castellanos, 50, and Mariano Alvarado, 49, are field organizers who talk to the disaster workers who travel to help rebuild towns and cities after severe weather. Many are not provided with safety equipment, and Castellanos and Alvarado urge them to ask for that equipment and then use it.

Alvarado himself was in an accident when he fell while repairing roofs in Panama City after a hurricane. He was in a coma for several days afterwards. “Sometimes employers appeal to the workers’ machismo to talk them out of requesting safety equipment,” Castellanos says. “We want to help change their thinking, and also bring their voices and concerns from the ground to the federal level, and get laws enacted to protect them.”

Rosella Ampuero, 26, recently took a break from food deliveries to quarantined residents to slip into her car and answer a few questions by Zoom on her phone. “Once Covid is, hopefully, just a bad memory, we will still have hurricanes and many other challenges that will affect the community,” Ampuero says. “Resilience Force started because underserved communities don’t always know their rights or how to get resources. And we will be forever working for that.”

Originally from Peru, she says the crises triggered by the pandemic solidified her thinking about her own future. “If a job doesn’t make me feel like I’m changing someone’s life, then I don’t want to do it.”