Re-rooting the Dutch Food System – From More to Better

Every day, the team at Kipster tends to 24,000 hens in a single building with a Photovoltaic roof made of solar power shingles. Kipster is a revolutionary and sustainable poultry farm, complete with a housing system designed to allow hens to express their species-specific behavior and feel comfortable. The hens are fed only with leftovers from the food processing industry.  Years ago Kipster developed the world’s first climate neutral egg, which leaves zero carbon footprint – and their team hasn’t stopped innovating since.

Along with Kipster farms, Herenboerderij communities have also developed rapidly in the Netherlands over the past decades. Anna lives in a Herenboerderij community in the Dutch town of Boxtel, where she and 200 other families of prosumers (consumers who are closely involved in the production of their food) live. To join Herenboerderij and become a stakeholder in its operations, Anna and her family, like all prosumer families, had to pay a one-off fee of 2000 euros and employ a farmer to take care of their food production. Anna loves being involved in the day-to-day operations, and she works closely with other families and farmers to determine which crops to grow and what animals to keep.

Together the families and farmers share the annual costs and risks associated with agricultural production, as well as a portion of the yield.  This year it’s a varied mix of carrots, beans, cabbages, beets and leafy vegetables, in addition to fruit, eggs, and meat.

Anna is proud of her role as a prosumer in the Herenboerderij community and at Kipster, and in her country as a whole. Today, in 2050, the Netherlands includes a diversity of farmers, stewards and prosumers who jointly contribute to food production and environmental regeneration. To Anna and many others, their day-to-day participation in food production is informed by one theme: food is the essence of life.

This Vision shifts one of the world’s leading agricultural economies from an imperative of producing more to one of producing better.  A flat, small, and densely populated country, the Netherlands’ agro-ecological location, unique governance structure, and rich history of trade earned this tiny country the position of number two global exporter of food (as measured by value) in 2017.

This great success has led to environmental challenges in the Netherlands, a small country with intensely cultivated fields between bustling cities and suburbs. Recent studies show that the country has exceeded its share in nitrogen, phosphorus, and greenhouse gas emissions.

Unhealthy and unsustainable eating patterns have also become widespread in the Netherlands.  Currently, only 16% of adults consume the daily recommended amount of fruit and vegetables, and they eat an excessive amount of red and processed meat.  About half of all adults are overweight.  Most of the food consumed in the Netherlands is imported, and over 275 pounds of edible food is wasted per person per year.

In this Vision for 2050, the Dutch food system has replaced the current linear model with a circular one that employs practices and technologies to safeguard natural resources, regenerate soils, increase biological diversity, and promote clean water and air. Plant-based diets have become the norm, and cultivation of fruits and vegetables has been prioritized. If food losses or wastes are unavoidable, they are sustainably recycled back into the food system. Local people have learned to eat and appreciate what the land provides. The community wastes less, eats healthier, and is composed of conscious prosumers (i.e., both producers and consumers of food).

The Vision showcases how by the year 2050:

This Vision is developed by scientists from Wageningen University and Research; representatives from three recently established farmer organizations (Toekomstboeren, Caring Farmers, and de Nieuwe Boerenfamilie); and environmental NGOs including the Foundation for Nature and Environment and the Centre for Agriculture and Environment and the Dutch Association of Biodynamic Agriculture. 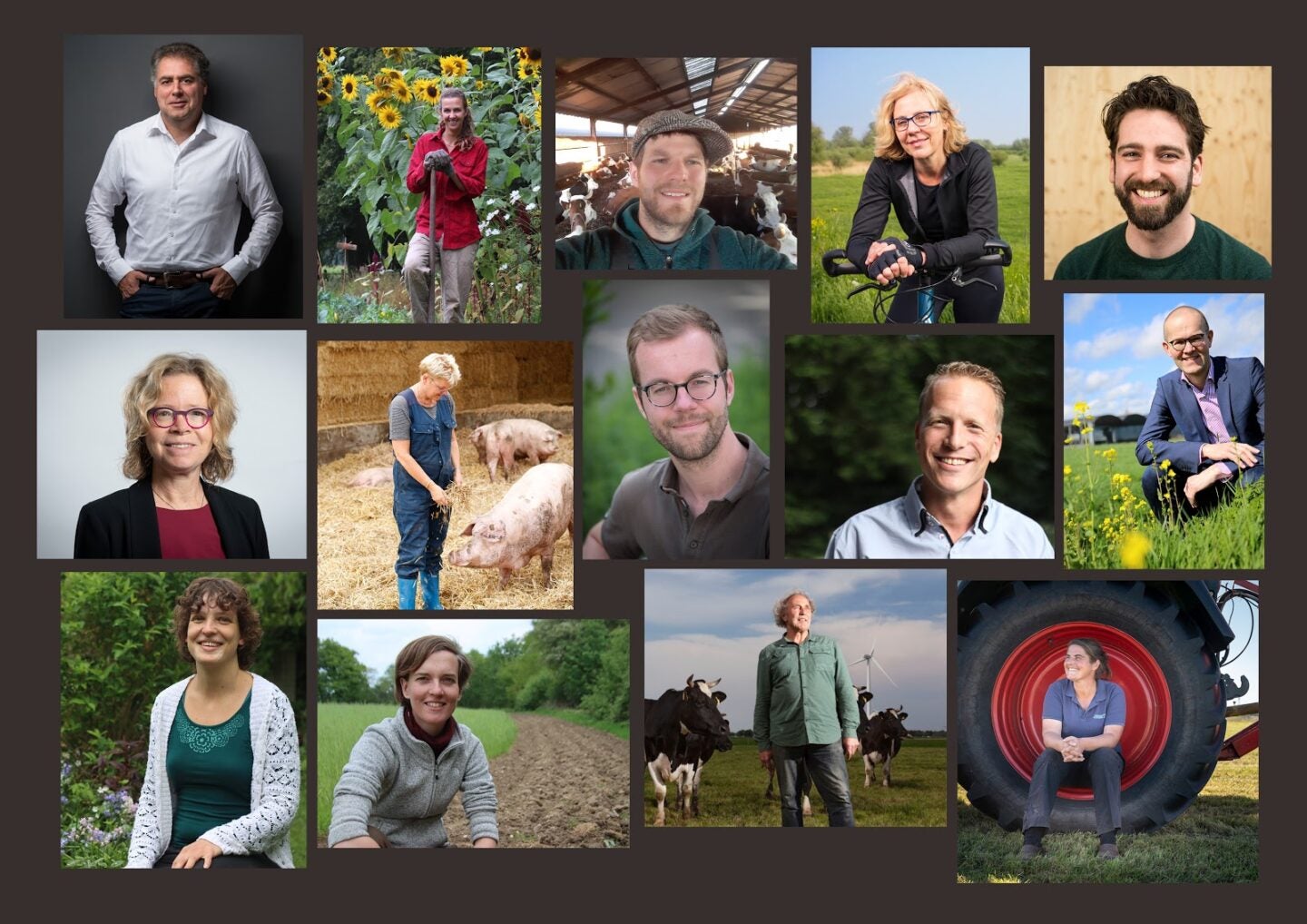 The fourteen members of the team, who were all born and live in the Netherlands, are motivated by the belief that evolving the Dutch food system should be focused on creating the best future possible for generations to come.

Click here to explore the full Vision for the Netherlands in the year 2050.