Kimi is the rare 14-year-old who likes getting up early in the morning. As a member of the junior youth group stationed on New Era Coop Farm, Kimi doesn’t want to miss a thing.  To an outsider, the daily routine may seem redundant; yet Kimi enjoys the continuity each day offers.  Five days a week she begins the day by singing songs with a community of her peers.

Breakfast ensues following the song ceremony, and every day Kimi chooses a bowl of porridge.  The porridge – also called Nmax – is a mix of perennial seeds that all grow together.  The breakfast offers robust flavors, an unbeatable energy boost, and a bit of nostalgia as Kimi often finds herself lost in memories of harvesting the diverse seeds used in her daily breakfast.

Days in the junior youth group at New Era Coop Farm are filled with hunts for berries and nuts, milking the cows and exploring new technology.  Kimi’s favorite activity to choose?  Operating drones!  The drones zoom around, check sensors, take soil samples, and connect with other technologies to check various crops’ bio-activity.  Sometimes Kimi and her friends even get to ride the “hors(e)”, an amazing hover bike, to move bison from one paddock to the next.

Kimi’s most beloved mentor on the farm is Martha, one of the elders.  Martha grew up on this farm when it was essentially a huge monoculture of wheat, spreading out as far as the eye could see. Kimi loves hearing her stories of planting 100 km of hedges and the importance of the hedges in attracting birds, deer, and moose, which look after the swales and wetlands.

People from the nearby reserve are welcome to hunt, and Kimi often joins them. Her favorite part is afterwards, when she can take a refreshing swim in the beautiful pond full of fish. Martha says farmers used to work a lot harder before the implementation of permaculture, a holistic set of farming principles centered on systems thinking. There was no time for swimming back then.

Every month the village gets together at the community feast where they pray and sing together, consult on issues, and hang out. Next year Kimi starts her year of service in the Aspen System, to learn more about maintaining food forests.  While she will be sad to leave the daily rituals of the New Era Coop Farm, her heart races thinking about the next adventure on the horizon.

The Vision for Canada’s Treaty Four Territory depicts a transformed food system that has been integrated with the process of decolonization and reconciliation between Indigenous and settler populations.

The Vision addresses the interconnected nature of relationships among people and natural systems.  In no small feat, the Vision also seeks to fight racism, the prevailing colonial narrative, and the colonial undertone of people dominating nature, with the recognition that transformation and renewal need to take place on every level of society to make things right (kwayeskastasowin) and acknowledge that everyone and everything is related (wahkohtowin).

Treaty Four Territory, set in the southern Canadian Prairie Provinces, is home to approximately 500,000 people, of which around 15% are Indigenous.  Thirty-five First Nation reserves are located in Treaty Four Territory. While the population was historically rural, a steady increase in farm size and mechanization has meant that many towns and villages have disappeared.

In the 1870s, to efficiently produce and export grain for the global market, Canada’s colonial authorities remade the prairies in Treaty Four Territory to reflect an industrial mode of production. Despite entering into treaties with the Indigenous nations who occupied the lands, the Canadian government pursued policies to eliminate Indigenous peoples and their cultures. The ripple effects on both the land and the community are still felt to this day.

The climate also poses a challenge: severe winters reach below -40 degrees Celsius and the frost-free growing season is limited to 120 days.  With annual precipitation ranging between 14-21 inches, the landscape is prone to both drought and flooding.

The Vision for 2050 focuses on restoring an equitable relationship between Indigenous people and settler populations through a deeper recognition of treaty rights, including a wider sharing and access to lands and resources; adopting a new system of measuring individual well-being and community progress; and adopting policies for watershed restoration and to conserve existing native grasslands, natural tree cover, and wetlands.

Treaty Four Territory Vision showcases how by the year 2050:

This Vision changes the future of food for Treaty Four Territory and offers a space where healing of the past can take place among the people and with the land. 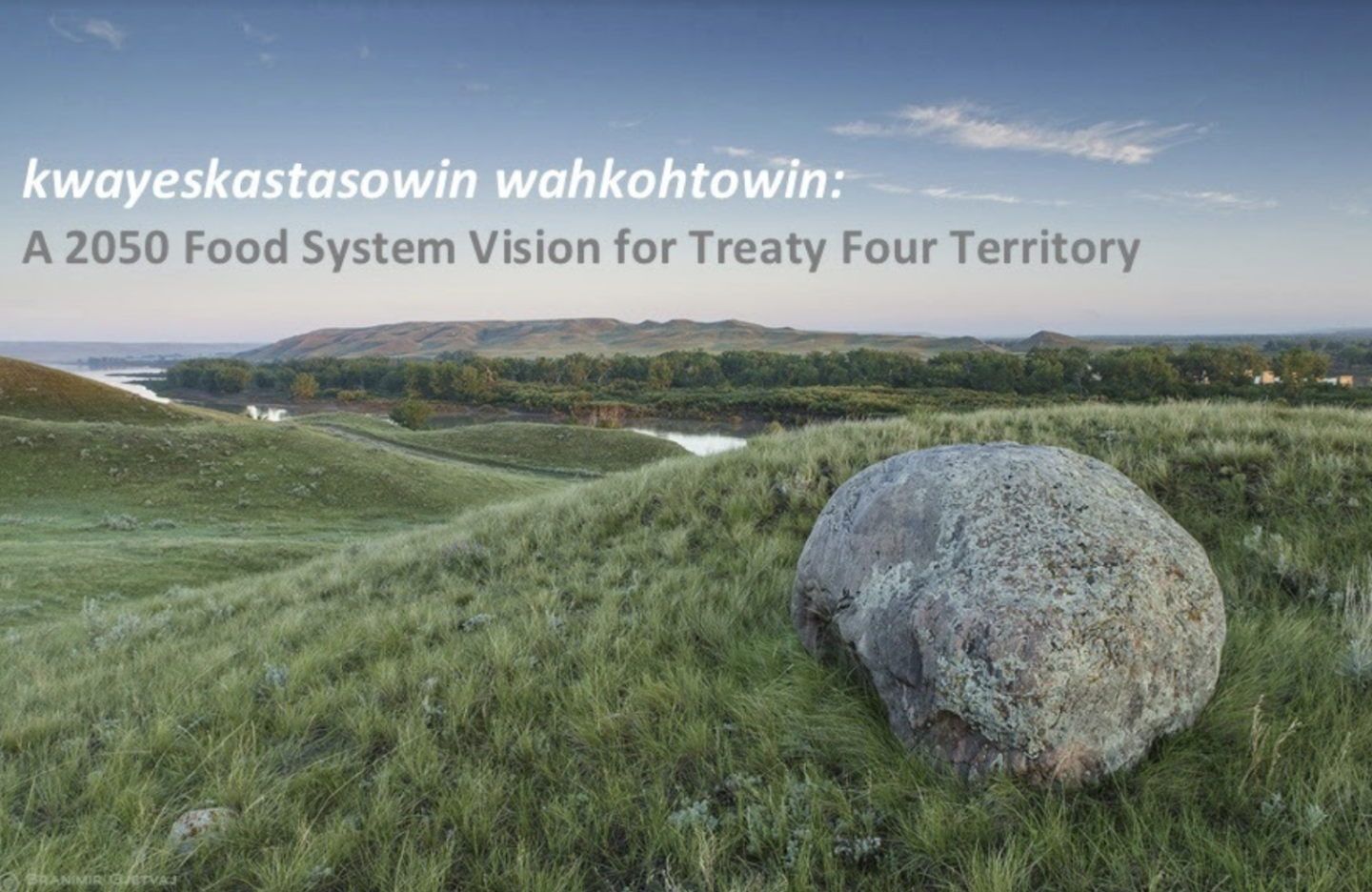 The kwayeskastasowin wahkohtowin team is spread across the prairie region, inside and outside of Treaty Four Territory. The team is associated with the Natural Systems Agriculture Laboratory at the University of Manitoba, and it works in partnership with faculty members of the Universities of Saskatchewan, Manitoba, and Alberta; with Indigenous partners and governments; and with members and staff of the National Farmers Union and Sask Organics.

Click here to explore the full Vision for Treaty Four Territory, Canada in the year 2050.