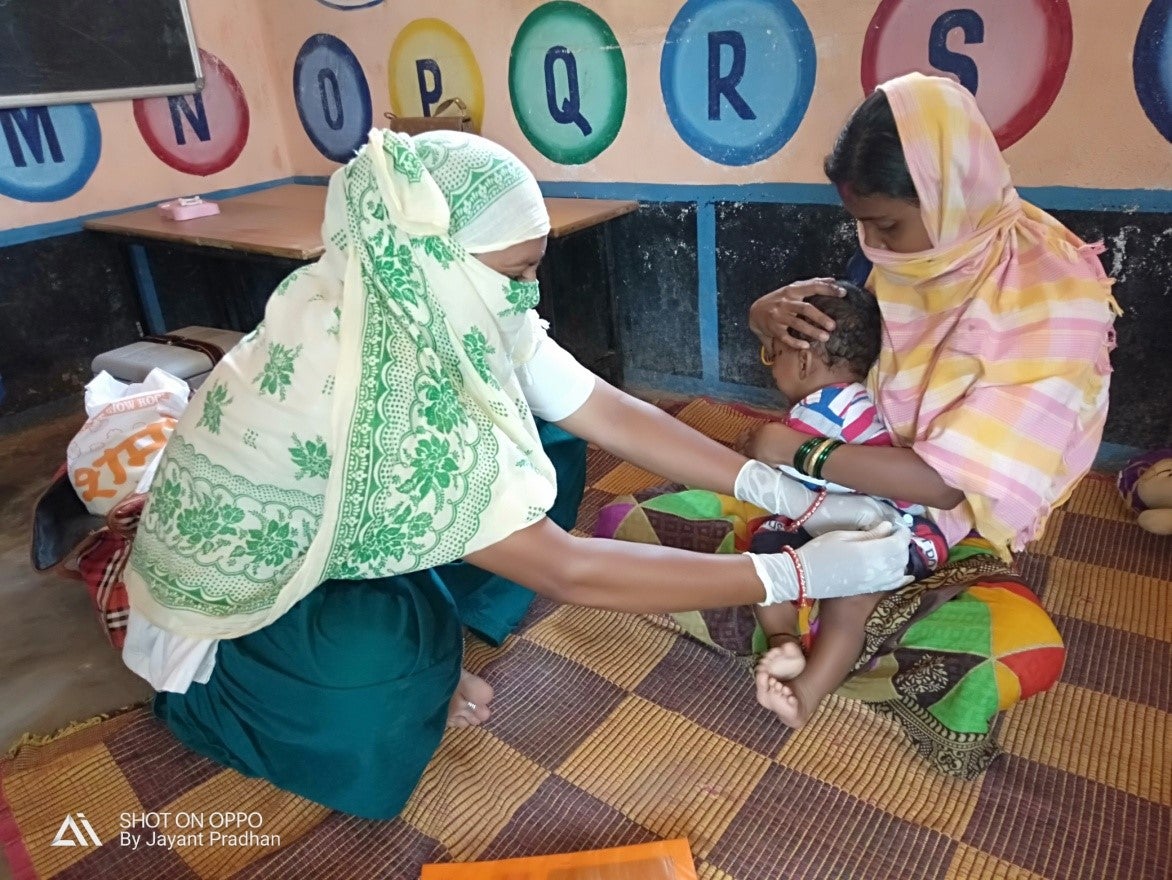 Child immunizations plummeted on the priority list for many when India locked down to fight Covid-19. There were so many other, more immediate fears. But midwife Anju Koretia knew that if she and her team didn’t find a way to keep vaccinating children against deadly diseases, they would face another health crisis on the heels of the pandemic.

First, though, she had to control her own fear. “I was really scared,” the 38-year-old mother of two sons recalls during an interview conducted by cellphone. “But I also had a sense of duty. So I began by trying to collect all the relevant information about coronavirus that I could—and not only for myself. I knew I would face a lot of questions from parents.”

Anju is known by name in the community where she has worked for the last decade supporting pregnant women and their newborns. When a child has a fever or an expecting mom needs advice, she’s there. She’s trusted.

Yet even she faced initial resistance when she tried to resume vaccinations after India announced closures on March 25. “I promised them they would be secure,” she says. “A few came and saw the safeguards we had in place, and then more came, and slowly the resistance reduced.”

Her community’s government-led vaccination push is supported by the partnership between The Rockefeller Foundation and UNICEF, which concentrates on applying digital technologies, data science and analysis to complement government efforts to strengthen district health systems. Having real-time data better informs public health workers and managers, improving overall services. During the pandemic, the partnership is supporting the continuity of health services and resource planning, including for vaccination campaigns in select states in India.

The work falls under the broader $100 million Precision Public Health initiative launched in September 2019 and aimed at preventing six million deaths in ten countries by 2030. The initiative began in India and Uganda, with plans to expand to eight additional countries.

“Efficient data systems and use of data to support the comprehensive primary healthcare will ensure implementation of universal health coverage in India. We are thankful to Rockefeller for their continuous support to sustain these efforts,” said Luigi D’Aquino, UNICEF’s Chief Health in India. 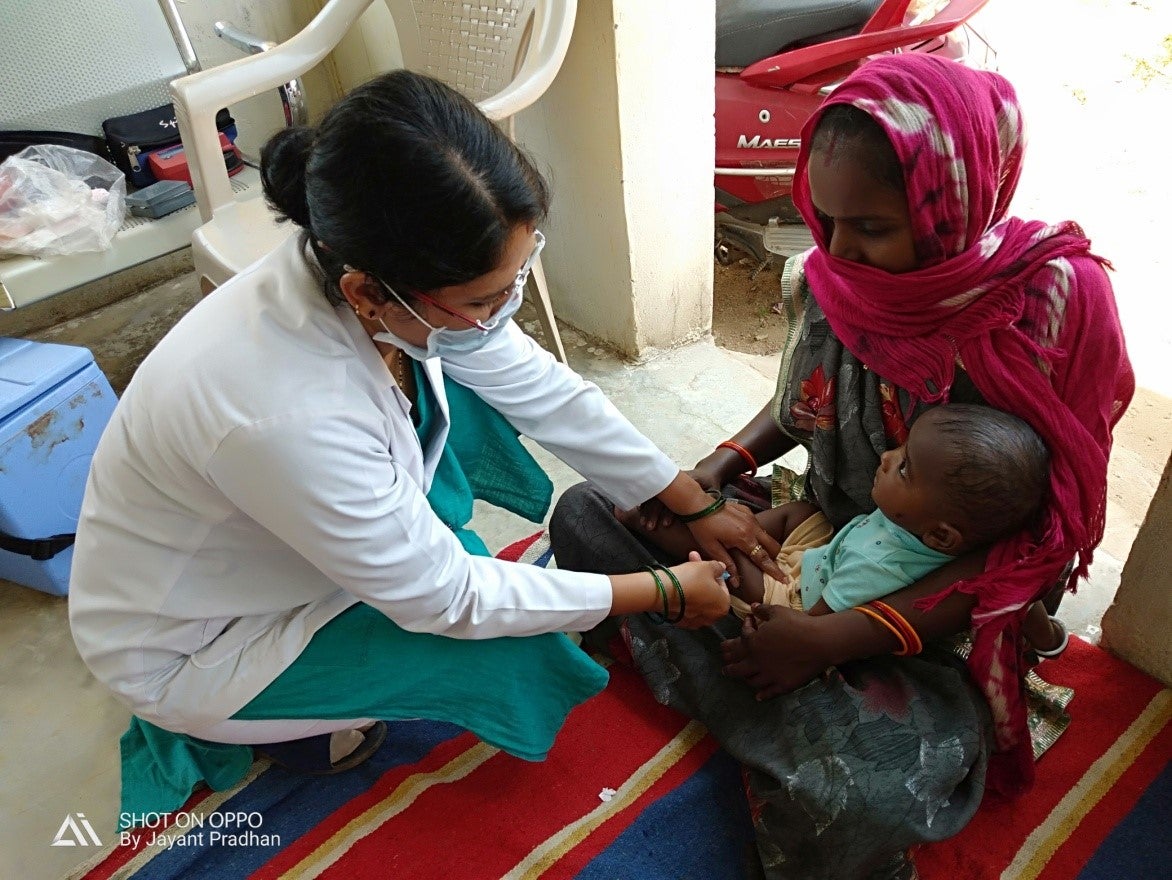 Each year, an estimated 1.7 million children around the world die from diseases that could have been prevented through vaccinations. Campaigns to vaccinate the world’s children against fatal childhood diseases have been an ongoing initiative of The Rockefeller Foundation since 1985. Even before that, in 1951, the Foundation’s Max Theiler received the Nobel Prize for his discovery of an effective vaccine against yellow fever.

“Even as we fight Covid-19, we need to keep vaccinating safely and stay attentive to long-term public health goals. This also includes continuing to act against data inequity and health inequity, which go hand-in-hand,” said Dr. Naveen Rao, the Foundation’s Senior Vice President of the Health Initiative.

But immunization drives worldwide have faced challenges during the pandemic, impacting measles, polio, rota virus diarrhea, tuberculosis, influenza and other diseases that could put at risk the lives of nearly 80 million children under the age of one, according to a recent analysis from the World Health Organization and partners.

“We saw in the Congo during the Ebola outbreak that there were more measles deaths than Ebola deaths, and we feared that would happen here,” said Dr. Sridhar Prahlad Ryavanki, UNICEF’s health specialist in India’s central-east state of Chhattisgarh, where Anju works. He referred to disruption of vaccination efforts triggered by the 2014-2016 Ebola outbreak that led to a surge in measles cases in some regions of those countries, along with other vaccine-preventable diseases.

India’s health officials have historical awareness of the importance of immunizations. At the time of India’s independence in 1947, the country reported the largest number of smallpox cases in the world; tuberculosis was also recognized as a major killer. India’s infant mortality rate was 129 deaths per 1,000 live births in 1971; in part thanks to vaccines, it has decreased to about 32 per 1,000 in 2018, headed toward the Sustainable Development Goal of 25 or fewer by 2030.

Still, one in five of the world’s 5.9 million under-age-5 deaths take place in India, with more than half being from vaccine-preventable and treatable infections. Continuing to vaccinate is key to saving lives, officials warn. “While the world strives to develop a new vaccine for Covid-19 at record speed, we must not risk losing the fight to protect everyone, everywhere, against vaccine-preventable diseases. These diseases will come roaring back if we do not vaccinate,” WHO Director-General Dr. Tedros Adhanom Ghebreyesus said recently.

Today Anju’s home district of Dantewada is a success story. Immunizations have been able to continue at almost normal pace, thanks in no small measure to the dedication of healthcare workers like Anju and her colleague Reena Vishwas, who still goes door-to-door to the 125 households she serves. The district’s literacy rate is between 35-40 percent, and some 70 percent of residents live below the poverty line, compared with about 22 percent nationally.

The two women credit community trust combined with a targeted public awareness campaign about the life-saving importance of vaccines for their success in continuing the immunization drive.

In addition, the Dantewada District team has implemented strict protocols: the number of people allowed at a vaccination site is now reduced to five from the normal 14-15, handwashing facilities and hand sanitizers are available, masks are required and circles of social distancing have been drawn on the floors. 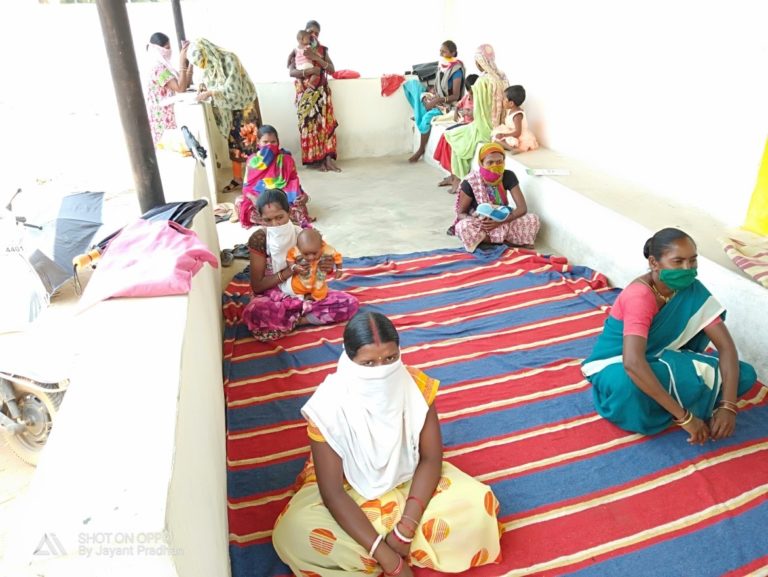 And in terms of the supplies, “we keep a close eye on the stock so we can replenish it well in advance, and we also watch the temperatures of the vaccines,” said Dr. Gajendra Singh, a UNICEF health officer in the state. To retain its potency, the vaccines must be stored at temperatures between about 35-46 degrees Fahrenheit.

Anju, who is working overtime these days and still helping with immunizations two days a week, knows the pandemic will be a long-term challenge. But when asked what keeps her up at night worrying, she only laughs. “There is too much work to do every day. I’m too tired,” she says. “Nothing keeps me up at night.”

Working to realize the right to immunization for every woman and child, especially the most vulnerable.