Terra Incognita: 100 Maps to Survive the Next 100 Years

by Ian Goldin and Robert Muggah 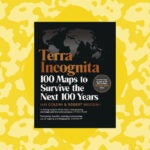 Ian Goldin participated in the Bellagio residency program in 2017 and 2022. During the 2017 residency he worked on Terra Incognita: 100 Maps to Survive the Next 100 Years. Ian is Professor of Globalization and Development at the University of Oxford, where he is a Professorial Fellow at Balliol College. From 2006 to 2016, Ian was the founding director of the Oxford Martin School, where he currently leads the research programs Technological and Economic Change, the Future of Work, and the Future of Development.

A few words with Ian

“When I arrived at the Bellagio Center I was at the beginning of the writing process. While there, I had many conversations which helped shape the book. Among the most influential were those with a fellow resident who was an artist and musician, who made me recognise I needed a chapter on culture.

“For future residents hoping to write at the Center, I would advise ensuring that you spend large parts of the day undisturbed. I had a regular routine which included exercise, meals, emails, and a minimum of six hours per day spent writing, five to six days a week.

“The book covers 14 different areas, from inequality and globalization to climate change and culture and hopefully will be of interest to individuals with broad as well as specific interests on how the world and societies have evolved and where we are heading.”

Map-making is an ancient impulse. But now, when the world is changing faster than ever before, our old maps are no longer fit for purpose.

Based on decades of research, and combining mesmerizing, state-of-the-art satellite maps with enlightening and passionately argued analysis, Terra Incognita charts humanity’s impact on the planet, and the ways in which we can make a real impact to save it, and to thrive as a species.

Learn about: fires in the arctic; the impact of sea level rise on cities around the world; the truth about immigration – and why fears in the West are a myth; the counter-intuitive future of population rise; the miracles of health and education that are waiting around the corner, and the reality about inequality, and how we end it. The book traces the paths of peoples, cities, wars, climates and technologies, all on a global scale.

To find out more about Ian’s work, you can visit his website, or you can listen to him discuss radical change with Thinking the Unthinkable. Ian and Robert have discussed Terra Incognita with StratNews Global. You can also find out more about the research of the Oxford Martin School. Or, you can simply follow Ian on Twitter.