by Tamara Shefer and Jeff Hearn 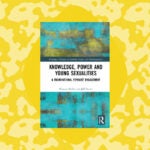 Tamara Shefer participated in the Bellagio residency program in 2016. During this residency she worked on Knowledge, Power and Young Sexualities: A Transnational Feminist Engagement (Routledge, 2022). Tamara is Professor in Women’s and Gender Studies at the University of the Western Cape, South Africa.

A few words with Tamara

“When I arrived at Bellagio, I was just beginning the book and while in residency I completed four draft chapters. Simply having the time and beautiful space and nurturant care of the Bellagio Center was very key for me in getting the structure of the book developed and in making substantial progress on the writing.

“Presenting my work to an international group of outstanding thinkers across disciplines was also very helpful. It still took me a while to complete, but the time in Bellagio was absolutely invaluable for the development of this monograph. The conversations with others were hugely stretching at all levels and their comments on my work were very constructive and affirming of the value of my arguments.

“I also think the general atmosphere of inspiring work at Bellagio, both academic and artistic, was facilitative of knowledge-making and spurred me on to write what I managed to write and to give me the courage and commitment to complete the book eventually!”

“While the book is located in South African contexts, it speaks to global dynamics of research and practice directed at young people. It would be great to hear how the work resonates in other contexts internationally and have more dialogue.”

Framed by global analyses located in transnational, postcolonial and intersectional feminist frameworks, Knowledge, Power and Young Sexualities speaks to global concerns about the politics of knowledge and transnational flows of information with respect to gender and sexuality.

The book troubles the ways young people have been constructed as ‘trouble’ through critical readings of the effects and impacts, politically and ideologically, globally and locally, of scholarship and practice directed at South African young people’s sexualities over the last three decades.

The key argument is that efforts to challenge HIV, GBV and unequal sexual and gender practices among young people have tended to reflect and reproduce (re)new(ed) orthodoxies about sexuality, gender, family, and young people, while bolstering global and local racist, classist ‘othering’ of certain communities and nation-states, and reiterating the ‘innocence’ and authority of those already privileged and centered.