by Robert Inman and Daniel Rubinfeld 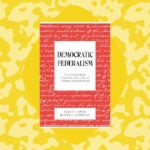 Robert Inman participated in the Bellagio residency program in 2007. During this residency he worked on Democratic Federalism: Economics, Politics and Law of Federal Governance. Robert is the Richard K. Mellon Professor Emeritus of Finance, Economics, and Public Policy at the University of Pennsylvania, where he teaches at the Wharton School and the Law School.

A few words with Robert

“Before arriving at the Bellagio Center, my colleague, Daniel Rubinfeld, and I had outlined the project after a joint stay at Stanford’s Center for the Advanced Study in the Behavioral Sciences, and by the date of my Bellagio stay had begun to draft the manuscript.

“My time at the Bellagio Center was, in many respects, foundational to the final style and tone of the book. Dan and I are both trained as economists with a foundation in government policy but found our research interests gravitating towards interdisciplinary scholarship – Dan in law and myself in political science.

“The objective of the manuscript was to bring all three disciplines – economics, governance, and the law – to bear on the question of how one should design federal, state and local governments: who does what?

“Dan and I served as advisors to the new Mandela administration on just this question for the first years of South Africa’s new democracy. We were struck by the fact that experts in each of the three disciplines – Dan and I included – knew so little of each other’s core insights. We thought a book on federal governance that drew on each of the three disciplines might be a valuable contribution to the issues we were facing.

“The time at Bellagio was a chance to focus our thinking and – most importantly – to see if we might be able to explain ourselves to non-experts. My colleagues at Bellagio, individually and collectively, provided the perfect ‘focus group.’ Now the final manuscript had to meet the standards of two audiences – that of our technically trained colleagues and now my Bellagio colleagues.”

Around the world, federalism has emerged as the system of choice for nascent republics and established nations alike.

Democratic Federalism considers the most promising forms of federal governance and the most effective path to enacting federal policies. The result is an essential guide to federalism, its principles, its applications, and its potential to enhance democratic governance.

Drawing on the latest work from economics, political science, and law, the book assesses different models of federalism and their relative abilities to promote economic efficiency, encourage the participation of citizens, and protect individual liberties.

To find out more about Robert’s work, you can read an interview with Robert and co-author Daniel Rubinfeld about Democratic Federalism.