Growing up, Habiba Ali and her siblings helped their mother sell fried plantains, okra soup, pounded yam and other Nigerian favorite dishes at a roadside stall in Kakuri, working by the light of a kerosene lantern as the sun set. Habiba, one of five children, came from a close family; her older sister Rakiya was her best friend.

Rakiya, though, often couldn’t work as hard. She suffered headaches and had trouble breathing, and her health didn’t improve even after her family gave up the roadside business. At age 31, Rakiya died. And as Ali began to learn about the dangers of indoor air pollution, she wondered if the smoke from those ever-present kerosene lanterns had contributed to Rakiya’s poor health.

This fueled Ali’s interest in the male-dominated renewable energy sector, which she entered with a decidedly woman-centric perspective. “Going home at night, I thought of those women I passed selling their wares, and I wondered how I could help so they didn’t have to face what I faced, or what my sister possibly faced,” she says. “Then at a forum in Uganda, I learned that staying next to a kerosene lamp and inhaling fumes for two hours is the same as smoking a pack of cigarettes. This kept ringing in my head.”

She began by buying a couple of solar-powered lanterns and handing them out to women roadside merchants with only one request—use them for a month or so in place of the kerosene lanterns. They weren’t that bright, but the women loved them. “I realized there was a business there,” says Ali. Now she is managing director and CEO of Sosai Renewable Energies Co., established in 2010 to bring a rural development focus to the renewable energy sector.

The Only Woman in the Room a Million and One Times

Sosai receives support under a $3.5 million 2019 grant from The Rockefeller Foundation to The All On Hub, which provides non-financial support to early-stage off-grid energy entrepreneurs operating in Nigeria over a three-year period. Nigeria is the most populous country in Africa, with an estimated 207 million inhabitants, and 44 percent of all households have no access to electricity. 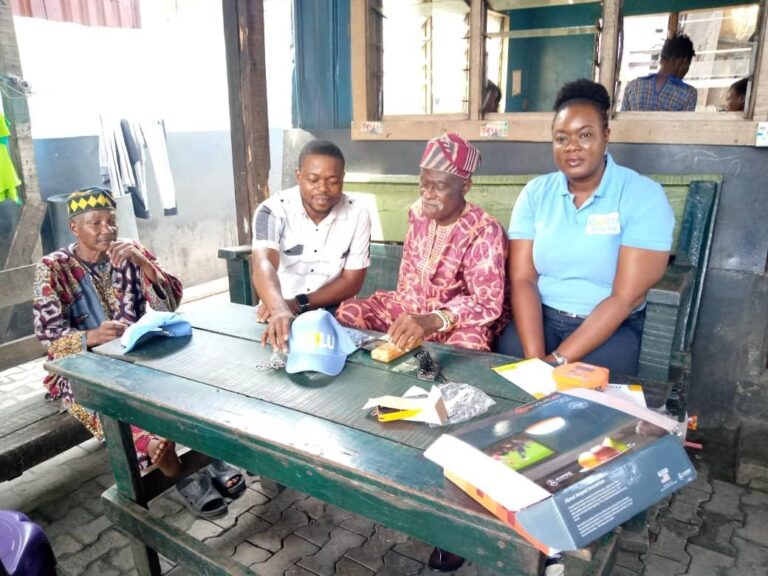 Though the Hub’s focus is to build the capabilities of off-grid energy entrepreneurs as a whole, Hub Manager Sele Inegbedion says there is particular interest in supporting women. Currently, some 15-20 percent of the businesses they support are women-led.

“Women’s nurturing instincts lend perfectly to improving livelihoods and communities,” Inegbedion says. “This means that the more women there are on the leadership frontlines within the renewable energy space, the more likely the sector’s sustainable impact objectives can be met. Organizations including All On must strive to walk the gender balance talk to ensure greater equality in the growing sector in Africa is actually achieved, accelerated and amplified.”

The energy sector globally is more male-dominated than the broader economy. Despite making up 48 percent of the world’s paid labor force, women account for only 32 percent of the workforce in renewable energy, and an even smaller percentage run companies or hold senior positions. In fact, if growth in women’s representation in management in the energy sector continues at the current rate, it would take until the 2090s to reach gender parity, according to an S&P Global report.

Why does this matter? Ali, 42, can answer this. “I understand very well the issues women face, and how we’re always trying to multi-task,” she says. “Besides, in rural communities, I wouldn’t be allowed to talk to the women if I were a man. But being a woman, I am allowed to work closely with them to find solutions and together seek economic growth opportunities.”

That observation is echoed by Aishat Alimi, an investment analyst at All On, who notes that in the rural areas where her work is centered, women working in the renewable energy sector “are seen as more credible. They generally pass the message better.”

Some 40 percent of Nigerians live in poverty, but 70 percent of those poor are women. Women represent between 60-79 percent of Nigeria’s rural labor force, but are five times less likely to own land than men. And access to capital for women business owners remains a challenge.

“I’ve had to be the only woman in the room one million and one times,” Ali says.

But slowly, times are changing.

Ade Balogun is part of this change. The General Manager of i-Kabin Integrated Resources and another business supported by the Hub, she began her career as an architect, moved into one of Nigeria’s top e-commerce firms and from there became an entrepreneur in the hair care business, urging women to give up extensions and be proud of their natural hair.

But she wanted to make a larger impact, and so she dove headfirst into the renewable energy space. I-Kabin started serving customers just a few months ago, in February, with an all-woman team of four determined to put women at the forefront of their business plan. The company sells or rents solar-powered portable batteries giving up to 50 hours of power that can be charged at one of their two kiosks, and they are aiming to reach 1,000 families by next summer as part of their pilot. 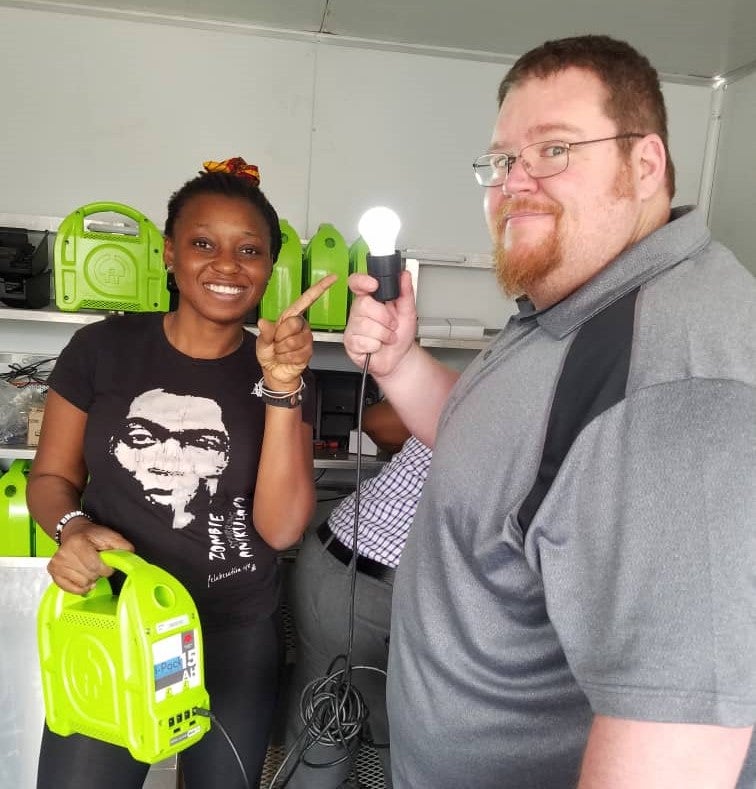 It’s not always easy being a woman in the renewable energy sector, Balogun notes. “Sometimes people want to talk to my boss, and I’m like, ‘hey, I am the boss.’” Still, she’s inspired when she considers how her young business is impacting people like I-Kabin’s very first customer.

Customer Number 1, as Balogun has dubbed her, is Folasade, who sells drinks at a bus stop in Lagos. When Balogun met her, she was using a diesel generator for electric power, and the costs were cutting heavily into her very slim profit margin.

“Now she uses our battery and uses one light, so it is very bright, lasts up to seven days, she can afford it, gets noticed and works without the noise of the generator,” Balogun says. “That makes me feel great. I’m doing something useful and impactful. I can truly affect the lives of people in my own small way and my own small corner.”

As Driven as Any Man, But with a Female Perspective

Hannah Kabir, the founder and CEO of Creeds Energy, found her way into the renewable sector mostly by accident. She wanted to study IT for development for her masters’ degree, but the scholarship she got was to study renewable energy. “I loved it,” she said. “When I began, in 2012, it was hardly even a sector, but Habiba Ali’s company was already operating so I reached out to her as a mentor.” 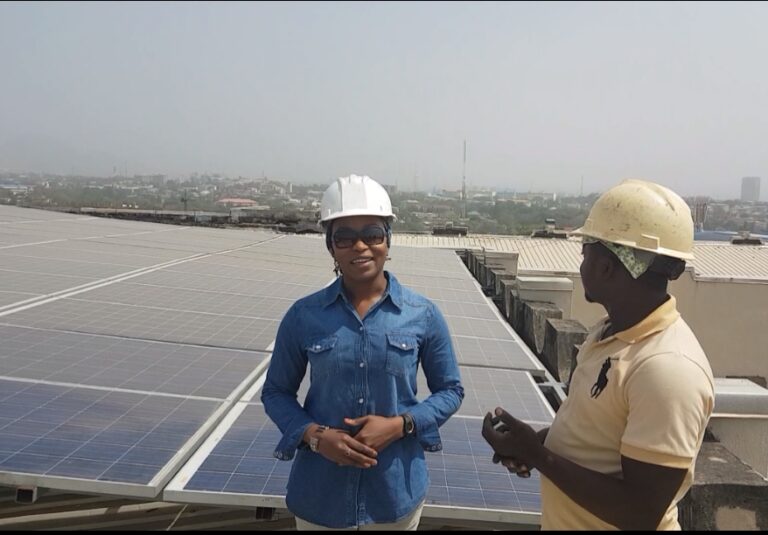 Hannah Kabir, founder and CEO of Creeds Energy, after installing a rooftop solar system for a school in Nigeria's capital city of Abuja

Creeds Energy focuses on underserved communities, replacing diesel generators with solar systems for small and medium-sized enterprises. “Many of the businesses we support are cottage businesses run out of the front of homes,” she says, “so we also introduce energy-efficient appliances like refrigerators as part of our basic package.”

Doseke Akporiaye, 47, also became a leader in the renewable energy field in a round-about way. She founded and managed an entrepreneurial consulting firm before she became Managing Director for the Nigeria operations of Oolu, one of the fastest growing off-grid solar companies in West Africa. In Wolof, a national language of Senegal, Oolu means trust. The company began operating in Nigeria just two years ago but is already in 22 states, and operates through a direct sales network, hiring people from within the communities they serve.

Akporiaye says the renewable energy sector has been hurt by Covid-19 along with the rest of the economy. “Our customers don’t have as much money,” she says. “If your income drops by as much as 50-60 percent, the question is, do I feed my children or do I pay for electricity? So we are offering flexible time to pay and free credit days.”

Another key priority for Akporiaye during the pandemic is keeping her team working. “We executives took a large shave in our salaries so we didn’t have to let go of any of our employees. That is important because there is no benefits system in Nigeria.”

Akporiaye says balancing humanity with business objectives has been a key goal during the pandemic.
“I grew up with my father telling me I could accomplish anything, and I’m as driven as they come,” she says. “But as a woman, when you run a business, there are things you think about and a perspective you bring to the table that a man might not necessarily bring.” 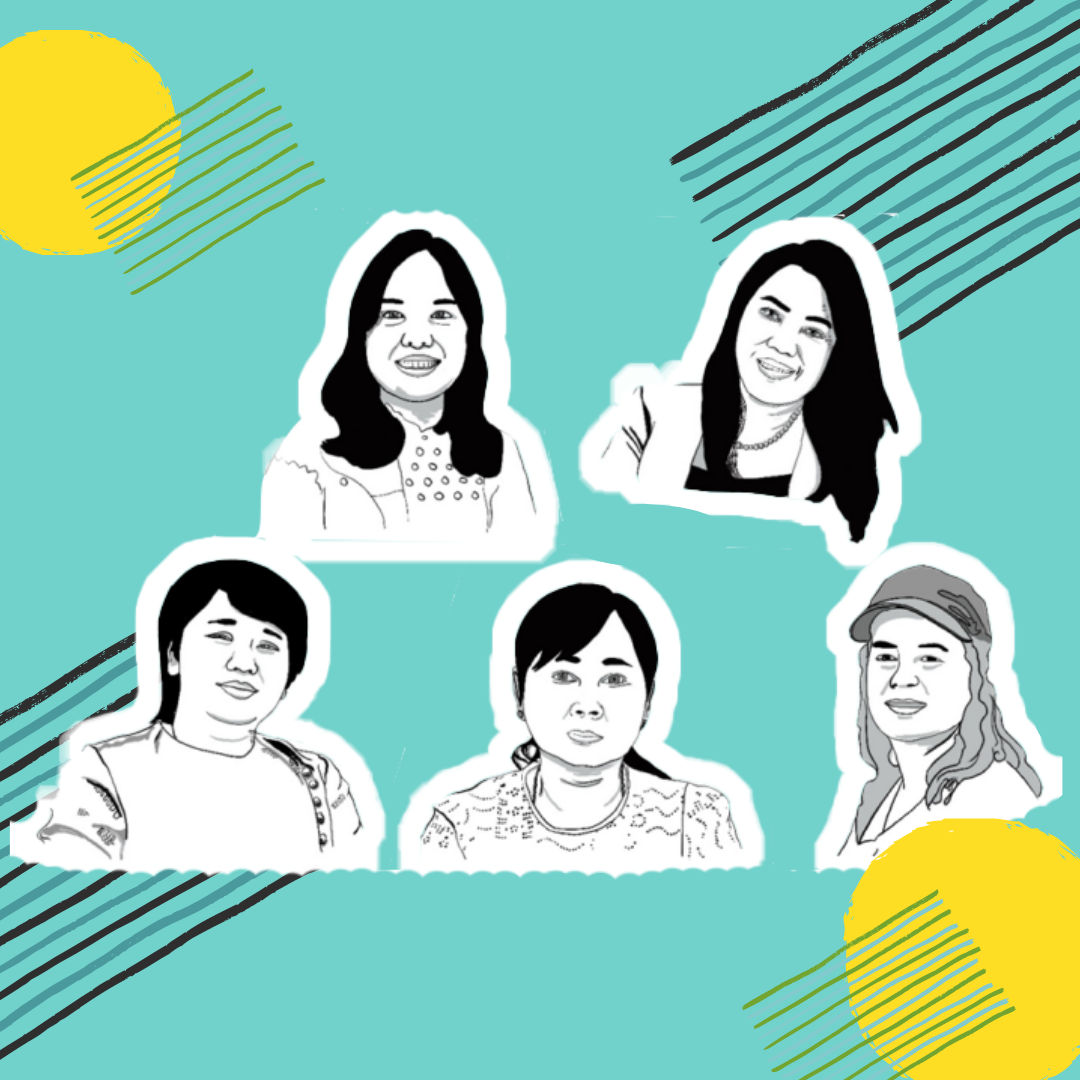 “We Can Find Our Way Around Any Barriers”: The Women Driving Change in Myanmar’s Energy Sector

If there was ever a mountain to climb, Myanmar’s energy transition represents the Hkakabo Razi of all challenges. With just 50% of the country able to access reliable power, mostly in urban areas, aggressive and ambitious solutions are needed at scale. And if ever there were talented and energetic mountaineers to scale this challenge, some of the […]