Michael Hodge got hired for his first job—cleaning his family’s backyard—when he was five years old. At age 10, he hauled hay, and by 15, he was flipping pies at Pizza Hut. An active and energetic man, the 46-year-old says: “I love working.”

So when the father of twins was laid off from his Houston truck driving job with the start of Covid-19 shutdowns, he immediately volunteered for the Bethel’s Heavenly Hands food distribution program, which overnight became as demanding as a fulltime job: need for food had soared, while the ability to hand it out had not. In fact, many retirees stopped volunteering to avoid possible Covid-19 exposure.

The work was satisfying, even as financial worries grew for his family. “I had no regular income coming in,” Hodge recalls. “But I told my wife, ‘Baby, it’s going to be okay.’”

Hodge was right. Thanks to an innovative jobs-and-food initiative created out of a partnership between The Rockefeller Foundation, the international humanitarian organization CARE, community groups and companies like TaskRabbit which agreed to forego its usual profit margin on hired gig workers, Heavenly Hands was able to hire Hodge at a time when his family badly needed an income.

The Foundation funds the food-and-jobs project in Houston and Louisville, both cities that are part of The Rockefeller Foundation Opportunity Collective (ROC), a 12-location initiative aiming to catalyze public and private sector investment to promote access to credit for BIPOC (Black, Indigenous, and People of Color) small businesses. The project’s goal is to help three groups: food recipients, gig and unemployed workers, and the non-profit organizations themselves who are experiencing logistical and administrative challenges because of the pandemic.

“As we work to address systemic inequities through the ROC initiative, we also want to help those who have been devastated by the pandemic and need help now,” said Brett Mons, The Rockefeller Foundation’s Senior Associate, Place-based Investments, U.S. Equity and Economic Opportunity Initiative. “The combination of CARE’s innovative program and our relationships with local organizations in Houston and Louisville allowed the team to rapidly deploy resources where they were needed most.”

If We Had More Food, There Is A Need

Bethel’s Heavenly Hands works in coordination with the Good News Church some 15 miles away, both under the auspices of Heads UP Houston, a non-profit led by Kevin Kebede. Together, they primarily serve Southwest Houston, an area with a population of about 513,600, some 22 percent of whom were living below the poverty line pre-Covid. 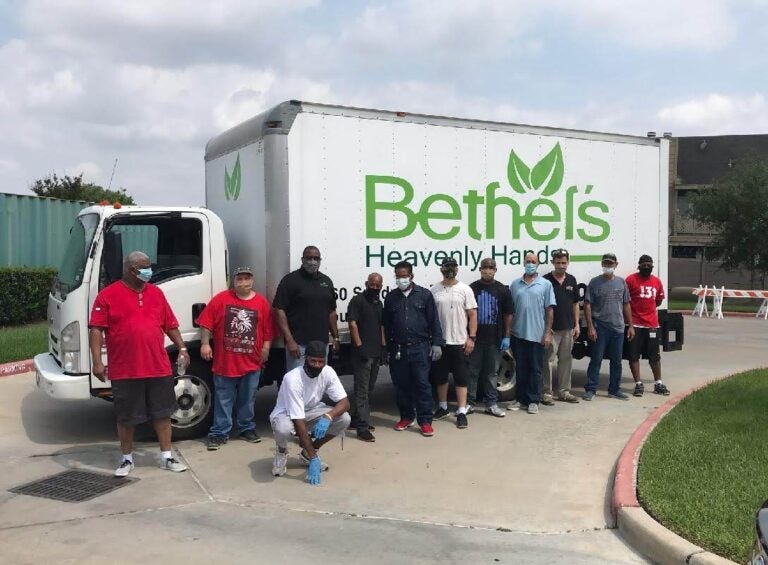 “Our community includes a lot of people in the service industry. With Covid, they either lost their jobs, or their hours were cut so much they didn’t have the financial resources to make ends meet,” says Pastor James Lee, Director of the Heavenly Hands Ministry. “Before Covid, we were serving about 7,500 families a month. Now it’s up to 11,400.” He doesn’t expect those numbers to taper off until the middle of 2021 at the earliest.

Meanwhile, at Good News Church, food boxes are handed out once a month, each containing meat, fresh fruit and vegetables, grains and non-perishables. In April, Kebede says, 150 cars lined up to get the boxes. Now it is up to about 800 cars, with some 400 more boxes delivered directly to apartments for those who don’t have access to transportation, and a tent set up to serve the homeless. “If we had access to more food, there would be a need for it,” Kebede says.

Some 50.4 million people, or 15.6 percent of the U.S. population, will experience food insecurity in 2020, projects the non-profit organization Feeding America. Among children and broken down by states, the projected rates range from 15 percent in North Dakota to 32.3 percent in Louisiana and Nevada. Black families are twice as likely to experience food insecurity as whites. Seventy-six percent of those dying from Covid-19 have an underlying condition, the majority of which are diet-related.

The Rockefeller Foundation is calling for three policy shifts to promote food security across the U.S.: an integrated nutrition security system, reinvigorated regional systems to better balance the nationwide food system, and equitable prosperity through the supply chain.

The extent and direness of food needs is not a surprise to Hodge, whose primary job is to pick up donated food from local grocery stores and bring it back to the Bethel’s Heavenly Hands for sorting and boxing. Though people stop by for food donations every day, mass distribution is on Wednesdays. “I’ve never seen so many cars lined up in my life,” Hodge says. Sometimes the lines begin in the pre-dawn hours.

“I’m not sure everyone understands how many people are just hungry,” Hodge says. “A week ago, I saw a lady crying. She told me she could only get food for one family but she had promised to get food for another family also. We fixed her up. We don’t turn anyone away. The look on their faces once they get that food—they know that, at least for a little while, they are okay.” 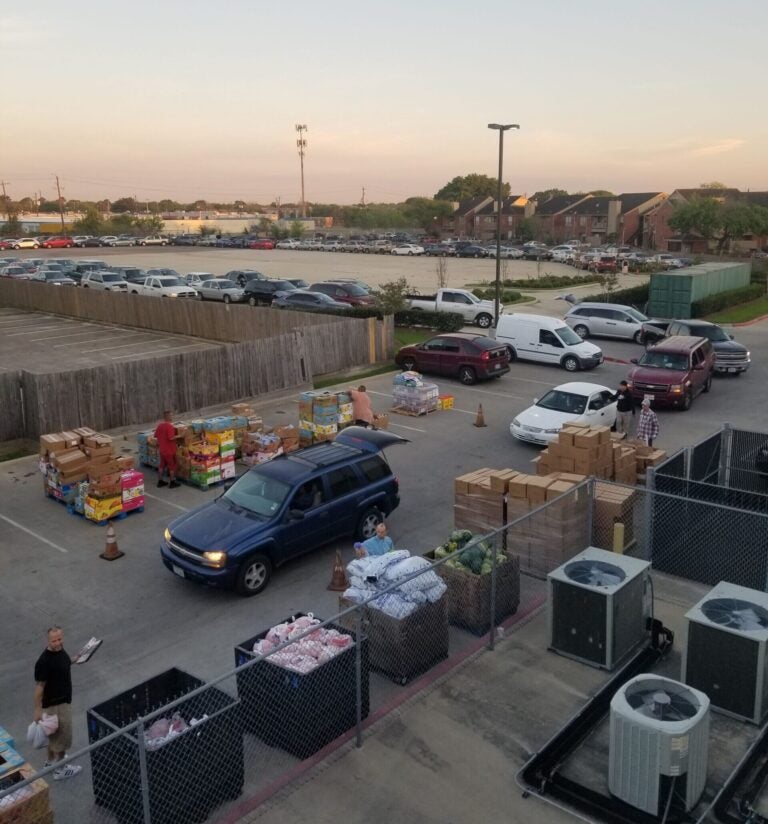 This is one of CARE’s first U.S.-based programs in its 75-year history. Besides Houston and Louisville, the program is active in three other locations, and expansions are under consideration. “We thought when we started that this would be a two- or three-month intervention,” says Ryan Shepard, Executive Director of the Care Atlanta Global Innovation Hub. “We are now looking at it as a two- or three-year effort.”

Shepard says the crises triggered and exacerbated by the pandemic have shown that “we have a tremendous responsibility to each other if we want to see great, good, or even better days. Healthcare infrastructure, food access, our education system—all these things that we’ve been talking about in silos are merging in ways that are concerning.”

Despite that, he says he remains hopeful. “I’m a glass-half-full kind of guy, so I really do hope we can have a moment of reckoning where we decide to commit to our better angels.”

In Louisville, Darren Montgomery, 23, was working for TaskRabbit when Change Today Change Tomorrow, a non-profit launched in September 2019, used the grant money to hire him. He helps sort and deliver food to West Louisville residents, and manage new workers.

He loves delivering food most of all, “especially to older people, because sometimes they haven’t had a good conversation for days. I don’t just drop off and keep moving. Times were hard before this, and I want to make people feel good,” he says. “Everything I can do to help—it helps me as a person.” 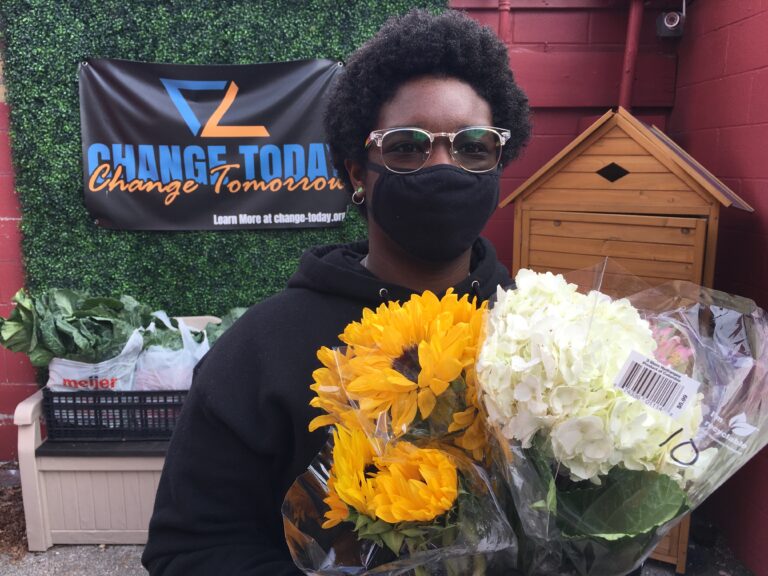 Becca Willenbrink, 22, graduated from Western Kentucky University in May and had planned to move to Spain and teach before the pandemic. “I didn’t expect to come back to Louisville,” she says. “I have no community here, and the problems with racial injustice—and, related to that, food injustice—are particularly strong.”

She also was hired by Change Today Change Tomorrow, and is grateful not only for the salary, but because the work delivering groceries to West Louisville neighborhoods has made her feel more connected. “This all comes just as I was set to begin my adult, independent life, and it is a genuinely confusing time,” she says. “The work has grounded me and helped me find a community of like-minded people who care about the things I care about.”

Part of what Willenbrink does is provide hot food and hygiene bags to houseless communities through the organization’s Umoja Project. “I recently befriended a woman named Sandy, and it is really fulfilling to get to see her every week,” she says. “Houselessness is another crisis that our country could honestly solve.”

From Waiting for Food to Packing It for Others

Back in Houston, the food and jobs project has brought enormous relief for Alma Garcia Hernandez. She and her husband have three children—a 13-year-old daughter, a 12-year-old son and another son who is about to turn 11. Her husband worked in maintenance in two hotels pre-Covid, but when the hotels were closed, the family had no income.

“I myself have been in that position where I’m in a vehicle in that line, waiting to get a meal for my children,” she says. “Me getting a salary came at a good time for us.” 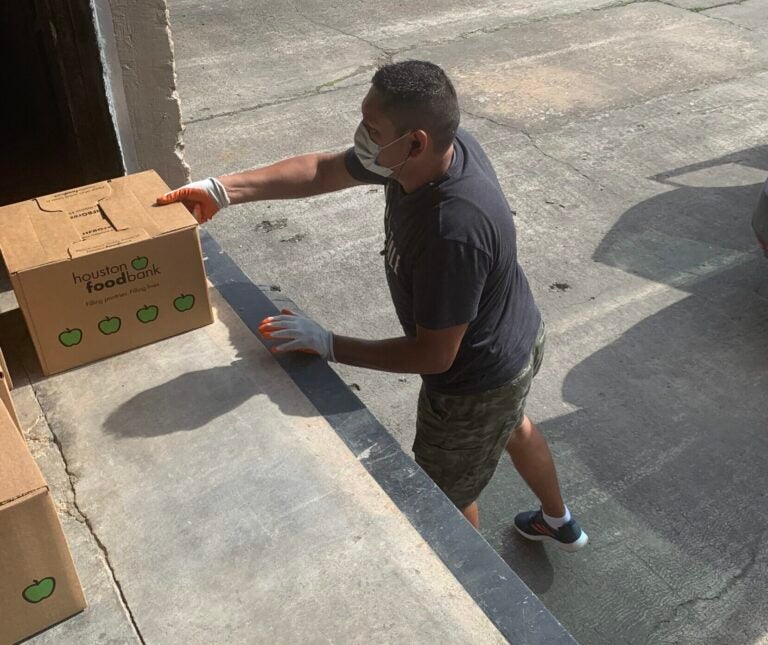 Kebede, too, says Heads UP Houston is grateful that the grant made it possible to hire Hernandez, who is in charge of canned goods. She checks the dates, pulls out expired cans, and gets them ready for boxed deliveries.

Originally from Ixtapa, Guerrero, on Mexico’s Pacific Coast, she echoes Willenbrink in saying the work has made her grow closer to her community. “I want to teach my kids that it is important to help people, even if you don’t know them personally,” she says, “because you never know what your own position will be in the future.”

Pastor Lee agrees that the hard times have brought people closer. “One young lady came in last week and said, ‘Pastor, there is no way I could have made it without you. The only thing I have to offer you is prayer,’” he recalls. “That boosted me. It keeps me running a little bit further and a little bit faster. She understood people need encouragement, and through her tears, she encouraged us.”