Burnout and the Balance Sheet: The Business Incubator That’s Here to Help

As part of the business Claudine Miles cofounded to help schools inject more social justice into their classrooms, she routinely urges teachers to embrace self-care so they can keep bringing their best energy to their students.

Burnout in education is common, with more than 44 percent of teachers leaving the job within the first five years, so her focus makes sense. But not until Miles enrolled in a 12-week program aimed at helping small Black-owned businesses grow did this entrepreneur and mom of a six-year-old son acknowledge that she was not following her own advice.

“We do a lot of wellness workshops for educators as part of our training, and at the same time, here I am burning out at both ends,” recalled Miles, CEO of Restore More. “Recognizing that was emotional and definitely a moment. It’s that wellness component that sets ELEVATE apart, and it is literally transformational.”

ELEVATE, run by the Atlanta-based Our Village United, is aimed at empowering Black-owned small businesses with resources, mentorship, training and wellness support. It is supported by The Rockefeller Foundation as part of The Rockefeller Opportunity Collective initiative, which works to bring greater resources to Black- and Latinx-owned businesses in 12 locations, including Atlanta, with the ultimate goal of contributing to eliminating the racial wealth gap.

ELEVATE began this year with the recognition that, after months of pandemic-linked shutdowns, many small business owners were even more demoralized and stressed than usual, and that burnout, as much as the bottom line, can shut a company down.

Focusing on Self-Care for Stressed Entrepreneurs

Through its initial questionnaire, ELEVATE found that 48 percent of the business owners they polled were experiencing burnout, 32 percent acknowledged depression, and 56 percent said they were suffering from decision fatigue. 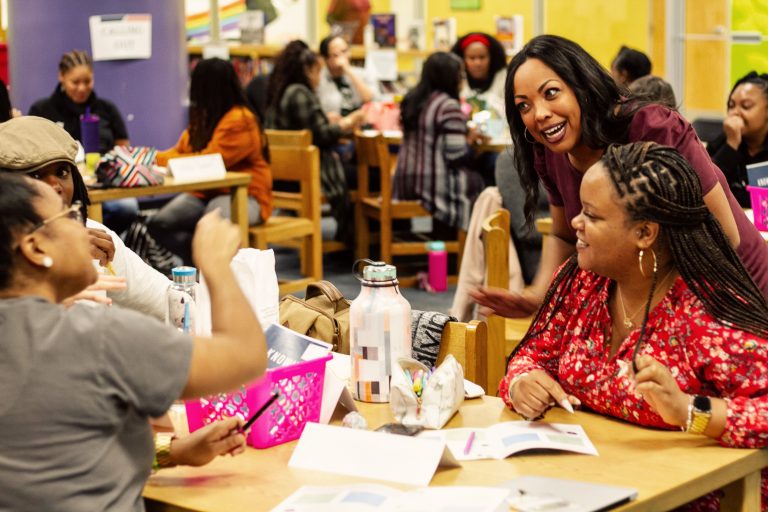 Claudine Miles, co-founder of Restore More, visiting a school where she works to bring more social justice into classrooms

These figures are echoed elsewhere. For example, a Gallup poll found that 62 percent of female small business owners and 51 percent of males reported experiencing higher levels of daily stress during the pandemic.

The median household income for a Black family in Atlanta is $28,105, compared with $83,722 for a white family, and 41.6 percent of Black families are asset-poor, without enough cash on hand to cover three months of expenses at poverty level, Prosperity Now reports. A person born into poverty in the city has only a 4 percent chance of escaping poverty during her or his lifetime, and lower levels of financial and business assets for Black residents are contributing factors to the racial wealth gap.

None of this is news to entrepreneurs like Miles, and contributes to increased anxiety. But personal stress is often the last thing business owners have time to pay attention to.

“We want to tell the true story of entrepreneurship,” says Our Village United’s Executive Director, Dr. Lakeysha Hallmon. “It is not beautiful. They make sacrifices every day.”

A former educator herself, Hallmon notes that she “spent several years focused on supporting students’ and teachers’ social and emotional needs. In sessions with teachers and administrators, I’d begin with, ‘This is a session about feelings, and I imagine that in this one room, you have experienced feelings such a burnout, anxiety, withdrawal and complete shutdown.’”

By extending this invitation to talk authentically, “teachers shared they felt seen, valued and heard,” Hallmon says. “As we began to build relationships with entrepreneurs, I heard similar things. Entrepreneurs felt a deep sense of loneliness, exhaustion and burnout.”

Out of this was born Hallmon’s conviction, and ELEVATE’s guiding belief, when Black-owned entrepreneurs and microbusinesses are helped holistically with everything from technical assistance to wellness coaches and mental health practitioners, the entire community prospers.

Miles had already been working 80 hours a week as an assistant principal when she decided, with close friend Kimberlie Milton, to form Restore More in August 2018, aimed at helping schools implement a culture of anti-racism, social and emotional learning and restorative practices meant to break the school-to-prison pipeline by solving problems rather than simply punishing kids. Milton serves as COO. 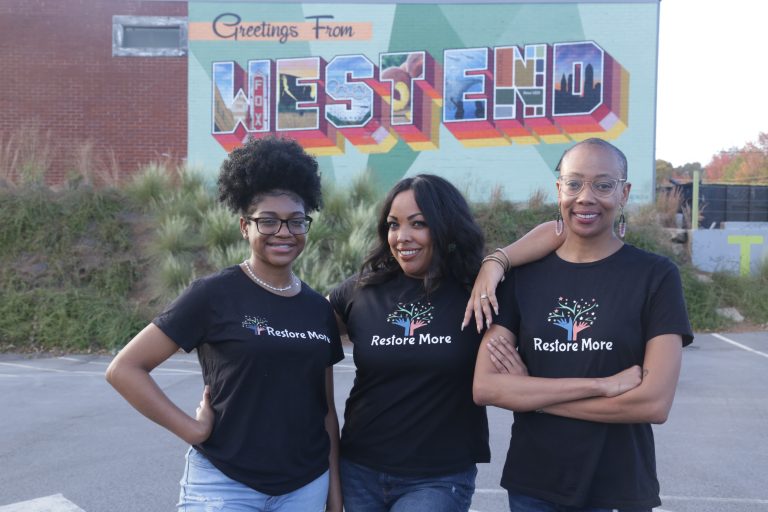 Restore More, with three fulltime employees including Miles and Milton, and a larger number of parttime facilitators, is partnering with 42 schools across the country, as well as several education organizations. They’ve also worked with 15,500 families since Restore More’s founding.

Miles is paying attention to both impact and the bottom line, and has attended four different workshops to try to hone the company’s business practices. It’s paying off. “Just since January, our revenue has reached $84,000, twice what it was at this time last year,” Miles says.

But it comes at a cost.

“This work as an entrepreneur, and especially in the social justice field, is very stressful right now. With ELEVATE, when we first got into groups with Dr. Joy to talk about wellness, I thought, ‘wait, there’s a healthy version of an entrepreneur?’” she says with a laugh.

Miles refers to Dr. Joy Beckwith, and calls the sessions with her “pivotal. She changed our business model. Now we take off a week every quarter, and once a month we get off at noon. Plus, it was invaluable to hear that you are not alone in feeling exhausted.”

Dr. Joy stresses that entrepreneurs need a safe space to be vulnerable, consider the rarely discussed psychological price of entrepreneurship, and explore strategies to support their mental health.

“We talk easily about our financial health or our physical health, but we also need to discuss mental health,” she says. “As entrepreneurs, we just endure and push forward, and ignore warning signs. But we want to teach you to stop for a second, feel your pain points and learn how to address them.”

Starting a Business Can Be Lonely and Frustrating

Lindsay Barnette started her clothing store, Kultured Misfits, as a true passion project in 2015, soon after she graduated from college and two years after she printed her first T-shirt with the slogan “We were never meant to fit in.” This became the store’s mantra, and in fact is the source of her motivation. 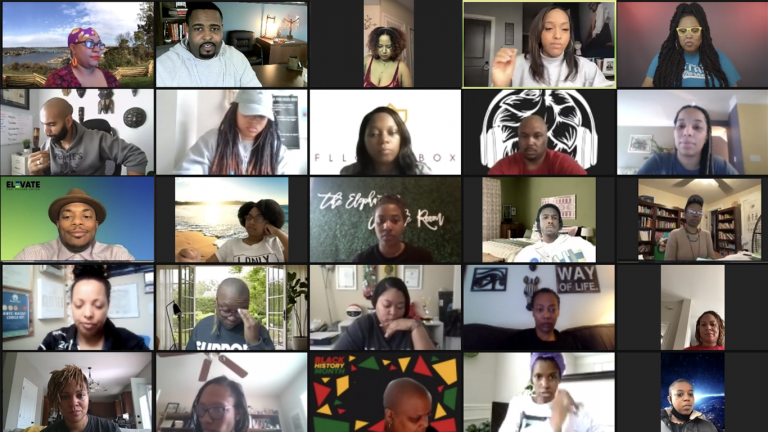 Screenshot from an ELEVATE training session

“I remember thinking growing up: who do I belong to? I’m too proper for some and not proper enough for others,” she says. “It took time, but I learned to value exactly who I am. And I wanted to create a brand that fosters a community which accepts you in every capacity that you are, while challenging you to learn about people who are different from you.”

As fulfilling as she found the work, she was not making the salary she needed. After completing the ELEVATE program, she is hoping to move from a five-figure gross to six figures.

“When you are a solopreneur, it is incredibly lonely and frustrating not to have the right people to bounce an idea off or give you encouragement. Having a true alliance became the game changer for me,” Barnette says. The wellness coach “says wake up every morning and take a couple minutes for yourself. At the end of the day, take a couple minutes and identify what went well. She also said failure sounds like a negative word, but it really means lessons.”

Another ELEVATE participant, Joseph Edelin, is a seventh-grade social studies teacher in Atlanta and the co-founder, with two friends also in education, of Hip Hop Heads Brewery, which combines craft beer with hip hop music. Customers can scan a QR code on cans of Hip Hop Heads Brewery beer, and a playlist of music comes up that has been curated to go with that particular beer.

“We want to create a really great tasting and a great listening experience,” Edelin says. “But as Black founders, the stressful part is making sure we cross all our T’s and dot all our I’s. The craft beer business is mostly run by white men, and we know eyes will be on us.”

Edelin says the ELEVATE program helped his team identify their core values—key among them anti-racism—and also changed the way they speak about their business. “We don’t talk about challenges; we talk about opportunities,” he says. “We feel far more confident after this training. We’re going to bring something special to Atlanta!” 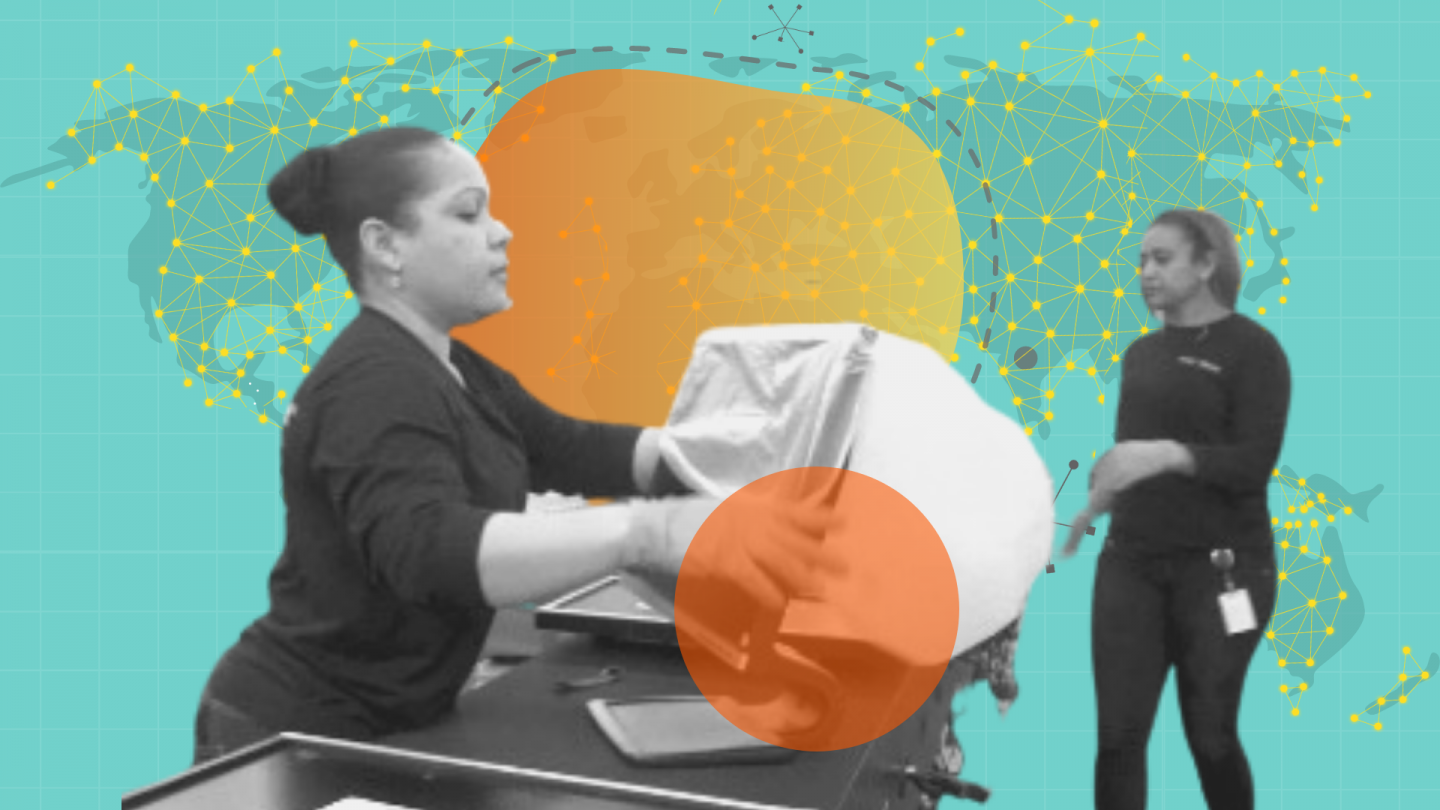 Here's Why Mentorship can Help Close the Racial Wealth Gap

Mentoring is critical for Black- and Latinx-founders, who face unique barriers in accessing capital or credit to start, grow, and sustain a business.