Americans Love Their Chicken, But the Poultry Industry Needs Reform

Picture this: the incessant growl of conveyor belts, the scent of blood laced with chemicals wafting through damp air. Employees standing shoulder-to-shoulder on greasy floors, gripping knives and scissors, some working while feverish because they are refused paid sick days, some wearing adult diapers because management denies them bathroom breaks.

And in the midst of it all, without pause, chicken carcasses are being relentlessly propelled down the factory line—at the rate of 140 birds per minute.

These are the grim facts of life today for many of the United States’ some 250,000 poultry plant workers—mostly Black, Latinx or undocumented immigrants—who were dubbed essential and kept at their jobs as the devastating Covid-19 pandemic triggered worldwide shutdowns.

So when the Biden-Harris administration in January withdrew a line speed increase of up to 175 birds per minute proposed by industry lobbyists and former White House officials, the nonprofit National Employment Law Project (NELP), a grantee of The Rockefeller Foundation that works to strengthen protections and build power for U.S. workers, took a moment to celebrate.

But only a moment. There was still too much to do.

A few weeks later, Debbie Berkowitz, NELP’s Worker Safety and Health Program Director and a former senior official at the Occupational Safety and Health Administration (OSHA), was before Congress, calling for more health and safety precautions.

Proving the value of unusual partnerships, she is backed by an alliance she created with activists in workers’ rights, animal rights and public safety. On March 31, they celebrated again when a federal district court in Minneapolis ruled that the U.S. Department of Agriculture (USDA) had unlawfully eliminated speed limits at slaughter plants without considering the increased risk of injury to plant workers.

Now, Berkowitz is seeking government revoking of waivers the USDA’s Food Safety and Inspection Service says were given to 54 poultry processing plants starting in 2018, allowing them to increase line speed to 175 birds per minute.

Every year, Americans consume 8 billion chickens. While 30 years ago, most Americans bought their chicken whole, today 90 percent are purchased as cut-up parts or processed into nuggets or strips. Poultry plant employees put in long hours to meet that demand. Paid an average wage of about $13.76 an hour, these workers faced pre-pandemic injury rates 60 percent higher than the national average, and illness rates five times as high, Berkowitz notes. Some repeat the same motion 20,000 times a day.

“Line speed is one of the most critical pieces of this work. The way profit is produced in the poultry industry is through volume, but it is done on the backs of low-wage workers, usually workers of color,” says Dr. Angela Stuesse, author of 2016’s Scratching Out a Living: Latinos, Race and Work in the Deep South, based on her work with Mississippi poultry workers. 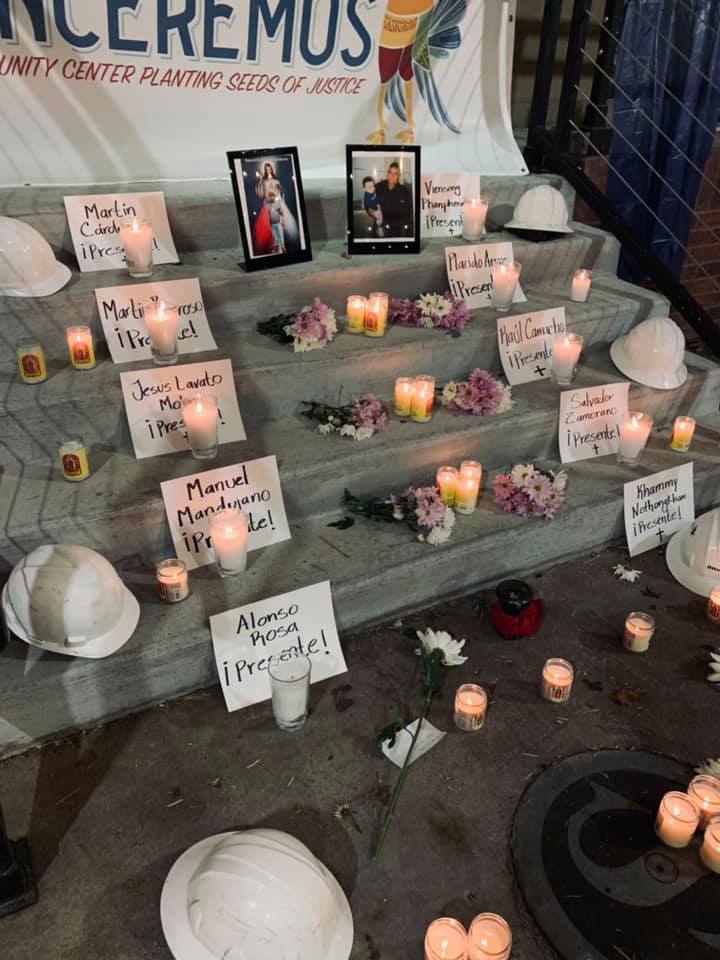 “Line speed is to blame for many injuries—acute lacerations and amputations, which run rampant, and also repetitive strain injuries,” says Stuesse, a cultural anthropologist at the University of North Carolina-Chapel Hill.

“This industry is never going to regulate itself. The only hope for a more ethical food system is more government intervention and regulation. At the same time, the industry has a lot of political power, and that is why the work NELP does is so, so, so important,” she says.

The already-present dangers in poultry processing plants multiplied when Covid-19 appeared last year. At the same time, the pandemic shined a light again on the misery of their work conditions. “Most of the time, the public doesn’t get to see and doesn’t really understand the conditions in these plants. And then Covid ripped open the door and exposed what it is like,” Berkowitz said.

As of mid-February 2021, at least 57,000 meatpacking and poultry workers had been infected with Covid-19, but this is thought to be an undercount because of reporting shortfalls, according to the non-profit Food and Environment Reporting Network, the only organization attempting to gather publicly available data on illnesses and death in this industry. Advocates began to press for paid sick leave, social distancing, masks and gloves, and improved communication with workers.

The Voices of Poultry Plant Workers

Poultry plant workers rarely speak publicly about their working conditions, and Berkowitz estimates only about 25 percent of the plants have unions. “It is very risky to complain,” notes Alex Gonzalez, 38, a father of four who has worked for ten years in the poultry industry after coming here from Mexico.

The industry has spent a lot of money in advertising to make working conditions look humane, and if you contradict that image, he said, “you might face retaliation. Even when I ask that a document they want me to sign be provided in Spanish instead of English, they get angry.” 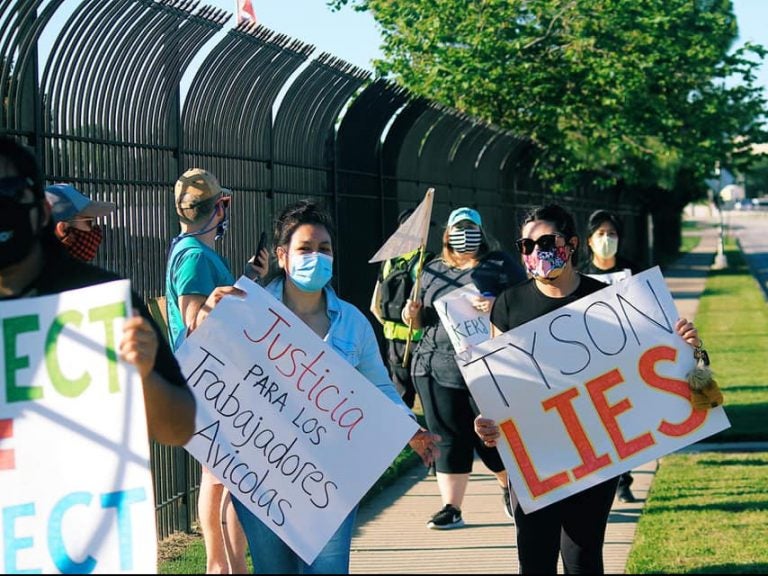 Greasy, slippery floors on top of the pressure to work quickly make his plant especially dangerous. “About a month ago, a woman holding a bag of chicken slipped and cut open her forehead and had to have 17 stitches,” he said. “Last Wednesday, a mechanic trying to fix a machine lost a finger. But they are under pressure to work quickly also. When a mechanic comes to fix a machine, often a supervisor and a manager will stand behind him, just watching him to push him to work faster.”

Gonzalez also says he believes line speeds are surreptitiously increased little by little by plant managers. “I feel it has increased about 40 percent since the pandemic began,” he says. “When the supervisors see we have managed to work at a certain speed, they make the line move faster.”

A Walk-Out Changes One Plant’s Conditions

Last December at the George’s Inc plant in Springdale, Arkansas, some 30-40 poultry workers walked out to protest unsafe working conditions and what they said was management’s attempt to conceal Covid-19 outbreaks at the plant. The action was the first of its kind by poultry workers in Arkansas.

Maria, 28, was one of those who helped organize the action, and she says it gave the workers new confidence.

“There was short-term retaliation, in that they followed me everywhere I went, even to the bathroom, to try to intimidate me,” said Maria, who has worked for five years in the poultry industry. “But always before, supervisors told us if we did any action, we would be immediately fired. That didn’t happen. So next time, I think more workers will participate.”

She also noted the workers achieved one of their goals: a return to staggered shifts to prevent overcrowding during Covid-19. But this mother of three children, aged 2, 7 and 8 says more reforms are needed. “I don’t want my kids to ever work at the processing plant,” she says. “They need to have better job opportunities than I do.”

Consumers Have A Role

Magaly Licoli was working at a community clinic in Arkansas in 2013, helping poultry workers try to get medical insurance, when a single mother, about 40 years old, came in. She had been injured in a chemical spill in a Tyson plant two years earlier that sent over 100 workers to the hospital. “I have holes in my lung,” the woman told her, “and no health insurance, and I can’t hold down a job.”

“I began understanding this is a systemic issue,” Licoli said. “Once these workers get injured, they are disposed of.” She threw herself into learning about the workers’ rights movement and joined 16 Latina women poultry plant workers to found Venceremos (“Overcome” in Spanish), one of a handful of organizations in the U.S. focused on poultry worker rights.

Consumers have a very important role to play—the “power of purchase,” Licoli says. “Using their pocketbooks, consumers can help us insist that poultry workers be treated humanely, with respect and dignity.”

This overlaps with The Rockefeller Foundation focus on advancing economic and racial equity in the U.S. by helping organizations use their food dollars in ways that advance the public good and prioritize food that’s grown sustainably and equitably.

Until the early 1940s, poultry raising was largely a small farm operation. The transformation to processing plants began with wartime demand. In the 1960s, the workforce was predominantly Black, and especially Black women. “The chicken plant replaced the cotton field,” a Mississippi civil rights worker told Stuesse.

Then, beginning in the 1990s, the industry turned its sight to Latin American immigrants, often recruiting them to relocate to one of the top five poultry-producing states: Georgia, Arkansas, North Carolina, Alabama and Mississippi.

Some companies launched what they termed the “Hispanic Project,” placing ads in the papers in border towns like El Paso, Texas, promoting poultry plant work in the South as an opportunity for a better life.

The maximum line speed has doubled in the last 35 years, according to Oxfam, and the temperature in most plants hovers around 40 degrees to reduce microbial growth on the chicken carcasses. The turnover rate—as high as 150 percent a year at some plants—speaks for itself. Yet the workers also need the jobs. “The poultry plants exploit workers, so they hire people who are vulnerable due to being largely shut out of other jobs,” Berkowitz says. 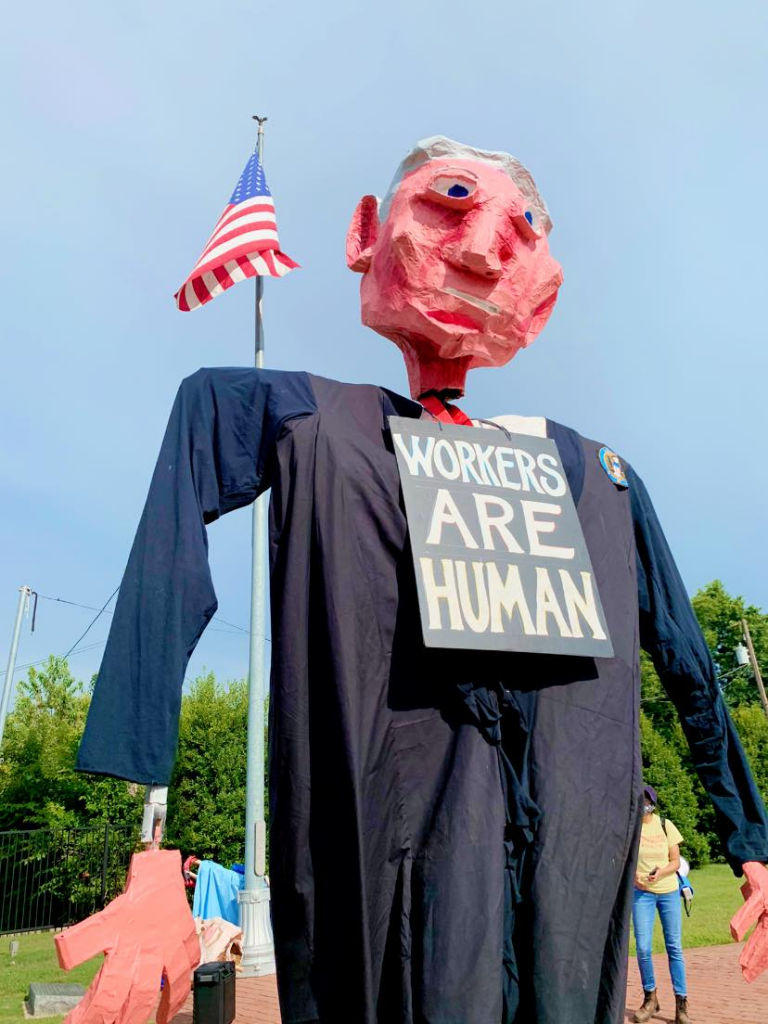 In her Congressional testimony, Berkowitz called on Washington to double the number of OSHA inspectors, launch a multilingual outreach campaign to inform workers of their rights, act to protect from retaliation workers who speak out about industry conditions, withdraw all of the waivers issued in the last two years that allow poultry plants to increase line speeds, and implement emergency standards to protect workers from Covid-19.