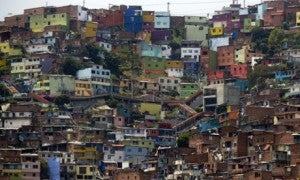 TOPSHOTS
View of Comuna 13 shantytown, one of the poorest areas of Medellin, Antioquia department, Colombia on April 1, 2014, ahead of the World Urban Forum 7, which will take place from April 5 to 11. Medellin was chosen by popular vote through the internet as “Innovative City of the Year” in a contest organized by The Wall Street Journal and Citigroup in 2013. The distinction was basically made for its modern transportation system, public library, escalators built in a shantytown and schools that have allowed the integration of society. AFP PHOTO/Raul ARBOLEDARAUL ARBOLEDA/AFP/Getty Images