Seeking Solutions That Lead to Inclusive Growth and Recovery: How We Can Tackle Housing Insecurity through the Power of Data Science

We are facing an unprecedented crisis in this country. In addition to the chronic stress that is Covid-19, we have already begun to face the downstream economic impacts as a result of increasing levels of unemployment and food insecurity. While The Rockefeller Foundation has doubled down on its efforts towards mitigating the impact of this growing economic crisis, we also acknowledge that we need to develop a larger toolkit of solutions, beyond direct financial support, to help those populations most vulnerable.

On the Innovation team, we are constantly seeking ways to amplify and complement work across all the Foundation’s initiatives by finding new ways to utilize data, to strengthen partnerships and to extract more leverage from existing networks.

These are often high risk, high reward opportunities with a high potential for failure. We embrace this risk because we believe there is power in identifying new forms of collaboration. When we came across an opportunity to support New America’s Future of Property Rights program by connecting them to our grantee and partner DataKind, we had a hunch that there would be potential for a promising collaboration to demonstrate the value of data science for social impact.

The New America team has been driving an effort to visualize the scale and breadth of housing instability and displacement across the United States, while also telling the stories of communities impacted by this loss. Initially, we had connected them to DataKind so that they could compile a Housing Loss Index, pulling in normalized eviction and foreclosure data, which ranks U.S. counties by severity of housing loss in the 5 year period between 2014 and 2018. This is the first attempt to consolidate these two leading indicators of housing loss into a single measure, and so will provide a much more comprehensive picture of housing instability than either eviction or foreclosure data can in isolation. They will visualize this index as a national heat map. 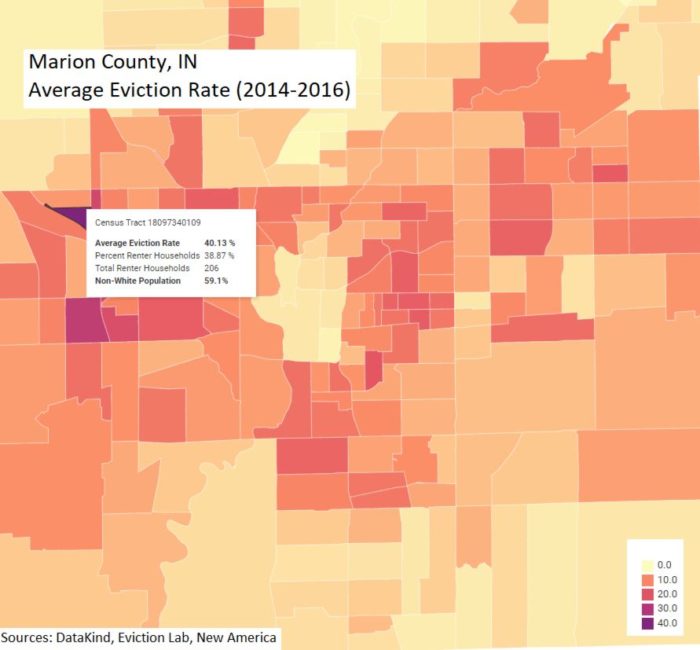 In addition to the national picture, with DataKind onboard, they began to work with local partners in three cities across the U.S. – Indianapolis, Phoenix, and Winston-Salem – to develop deep-dive case studies of housing loss and insecurity in those cities down to the census tract level. When Covid-19 hit and the instability crisis only became amplified, this work only became more important. The Deputy Mayor of Indianapolis had allocated $15 million of the city’s CARES funding to housing assistance and quickly had to decide which neighborhoods in his city most urgently needed to relief funds. With DataKind’s support, the New America team was able to create a census tract level heat map for Indianapolis that showed where evictions, mortgage foreclosures, and tax foreclosures had been happening over the last five years, pull out census tracts that were especially hard hit and where both evictions and foreclosures were high, and also demographic and socioeconomic predictors of housing loss – all within 24 hours.

This real-time evidence generation for policymakers is proving more critical than ever before as they need to mobilize resources and rapidly respond to an ever-evolving crisis. While we are excited that this collaboration led to actionable insights and direct human impact, we hope this example serves as illustrative of the many we hope surface through data.org’s Inclusive Growth and Recovery Challenge that tangibly demonstrate how we can equip the social and public sectors with the same tools as the private sector to optimize for success.

The application for the Challenge is open until July 17th and we welcome your ideas.