Visionaries from across Africa—including Kenya, Mozambique, Nigeria, Sierra Leone, South Africa and Tanzania—responded to an invitation to imagine a more nourishing and resilient food future for 2050. The Rockefeller Foundation launched the Food System Vision Prize to enable people and communities to be protagonists in their own food futures. Of the 1300 visions submitted, 76 went on to become semi-finalists. Of these, 19 hailed from Africa.

The timeliness and relevance of these visions is highlighted by the fact that Africa is leading the world in population growth and urbanization in the 21st century.  Furthermore, Africa is the continent with the highest percentage of the population engaged in the food system (for example, through small-scale farming or livestock rearing) combined with the lowest per capita income overall. Aiming to rewrite a more equitable and flourishing food system narrative for producers, consumers, and the environment, the African visions range from nourishing and regenerative holistic approaches to deployment of revolutionary technologies.

While distinct in their treatment of the unique people and places for which they were created, the African visions featured a few consistent themes: First, calls to change current production systems to address the climate crisis resonated across the visions. Second, the challenge of feeding growing cities emerged frequently, with calls for urban agriculture that prioritizes nutrition, leverages current urban resources, and builds infrastructure for farming spaces.  Third, the visions portrayed food futures powered by a data revolution to guide decision making; new technologies to reduce the drudgery of food production; and smarter technologies to monitor food and health and create new employment opportunities for youth. Lastly, the theme of equity in the food system was prominent, with the food producers of the future earning fair incomes that enable them to thrive.

Remarkable in the expanse of their vistas and the depth of their thinking, these visions together form a rainbow of food system ingenuity, possibility, and hope. Here are some highlights:

This vision imagines a flourishing food system in 2050 in which Sierra Leone is food secure, malnutrition has been eliminated, and the country produces 50 percent of its food supply (up from the current 20 percent) – all fueled by an emerging culture of entrepreneurship. The population enjoys dietary diversity, access to affordable and nutritious foods, and a higher level of food self-sufficiency. One of the pillars of the vision is to strengthen the capabilities of smallholder farmers, who employ practical technologies that improve production, storage, and processing. The other pillar is to incentivize food entrepreneurs to produce nutritious products.

This Cape Town-based vision emphasizes the right to food, offering an inspiring and positive vision to regenerate food cultures and inclusively address today’s opportunities and challenges. In this vision, building resilience is critical to develop a thriving and nourishing local food economy.

From Despair to Hope: Transforming a Cape Town Township

This vision focuses on Philippi, one of Cape Town’s oldest and largest townships. The vision builds on the early success of a brand-new Africanized hybrid hydroponics system that enables any household to produce its own food. “Agripreneurs” establish and support their own home farmer networks and food hubs.

Johannesburg 2050: The Largest Urban Farm in the World

This vision outlines the creation of a large urban farm within the City of Johannesburg Metropolitan Municipality, distributed on rooftops, parks, and in people’s homes and backyards. In 2050, Johannesburg is a city that provides for itself and the needs of its inhabitants; encourages wellbeing by allowing citizens easy access to safe green environments and a direct connection to the food they consume; takes pride in its locally inspired food culture; and encourages visitors to delight in a unique culinary experience. The models, systems, techniques, and technologies used to create this large, distributed urban farm could be used throughout South Africa and the continent.

The Ihemi Cluster is an important area of Tanzania’s Southern Agricultural Growth Corridor, with a population of more than 2M people, 90 percent of whom rely on agriculture for income. In this vision, productive food systems and sustainably managed land and water form the foundation for flourishing livelihoods and increased food security. Small-scale farmers are empowered through technology, information, and government policy. The market system is thriving, delivering equitable benefits with a light environmental footprint. Farmers organize and negotiate collectively to take advantage of market and investment opportunities; many have made the transition from subsistence to commercial farming. Stakeholders are united by a common commitment to social inclusivity, environmental sustainability and economic prosperity.

These visions showcase the power of ordinary citizens in envisioning and designing their own food systems to deliver nutritious foods, building on African culture and the principles of sustainability and equity.  The authors of these visions remind us of the urgency of working together for food system transformation, and help us glimpse, even in gloomy times, the brilliant possibilities born of the human spirit. 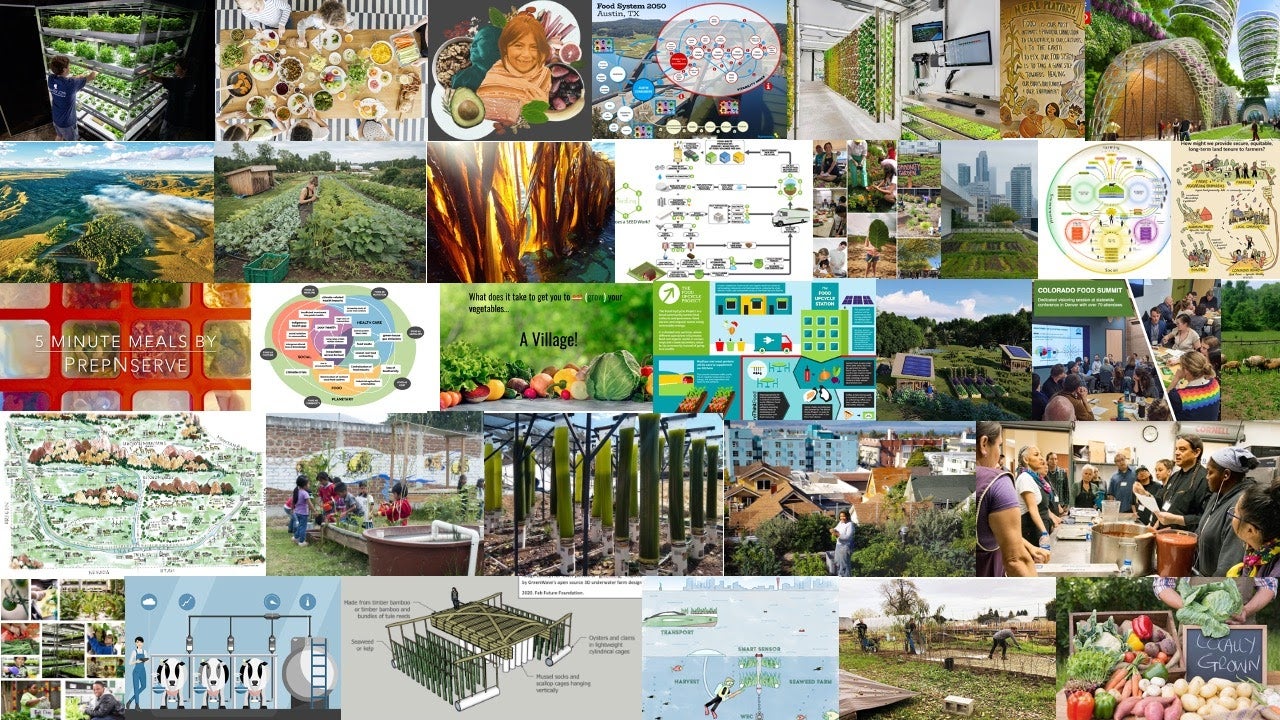 Seeking a bit of optimism, and even inspiration, in these challenging times? Take an hour or two and peruse some of the 79 semifinalist entries from around the globe for the Food System Vision Prize. From Appalachia to Australia, the Salish Sea to the Galapagos Islands, entries from teams comprising farmers, doctors, researchers, non-profits, […]